Posted by Unknown on June 09, 2012
Animated films have long given us hope and taught us some of our most valuable life lessons. Their creativity and wonderment has inspired the minds and imaginations of each generation since their creation nearly 100 years ago. Whether or not you still regularly explore this genre or not, there's no doubt that these films provided some of the most memorable childhood moments for each of us. No matter our age, we grew up with these films and so many of them are so strongly cemented in our lives. 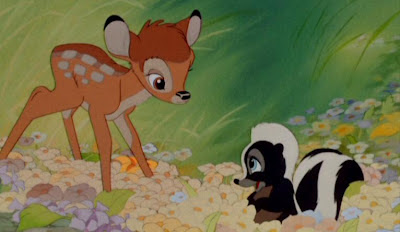 With all of that in mind, for this week's list we decided to theme our post around this weekend's release of "Madagascar 3". While simply going with animated films would have been an interesting and broad list to compile, we decided to narrow it down to a smaller section that still has plenty of memorable titles to offer. This time around, we decided to compile some of our favorite Animated Animal Films of all-time. Animated films have been around since the early 1900's, but it probably wasn't until the early 1940's when Walt Disney introduced such films as "Dumbo" and "Bambi" to the world and turned us all onto this section of the animated world. Since then, the use of animals as main characters in film has been a staple, as their presence has provided a more interesting and easier-to-absorb format for children and adults alike. There have been countless stories told with a variety of different lovable creatures in these title roles, and we continue to fall in love with all of them.

With so many great titles from this genre, hit the jump to see which animated films, which feature animals as the main characters, each of us see as the best!

Alex Schopp -
I had a hard time narrowing this list down. While I usually like to avoid creating more parameters for my lists here, I will say that, while not officially removed from consideration, Dinosaur and Bug movies didn't seem quite as specific to the category for me.

What's not to like about this movie? Great story, and plenty of great songs. Everyone knows this is the best animated movie ever; no reason for explanation.

I'm hesitant to put this film up here because I haven't seen it in so long. But I've really have been wanting to watching it again. I think this film was a lot darker and more grown up than some of the other films of the time, right? I remember pieces of imagery, and I think it was pretty intense. Let's put this one this high so we all have incentive to give it another watch.

Pretty sweet adventure tale. You have to start with the villain of this film, Cruella De Vil, but the dogs' journeys were always interesting. Can you imagine them coming out with an animated film these days with a villain who was literally rounding up puppies to skin them and use their fur for a coat though? Even if it was done as well as this film, it would get destroyed.

My aunt is mostly to thank for my movie obsession. While she's one of the biggest Disney fans I know, I'll still always remember this film most from the ones she showed us. When I was a kid, this was so different than every other animated film I was watching.

This is another one that's been so long since I've seen, but I always liked the characters and the look of the animation. Very bright and very clean I think. Plus the Robin Hood story is good any way you tell it.

I remember the ticket line to get into this movie was just insanely long.

I think The Disney Xerox Era produced some of Disney's most beautiful films. And of that era I'd put this one at the top of the list.

One of the great George Lucas/Steven Spielberg team-ups. Also, these would cost like four or five bucks each today.

Another fantastic Xerox Era Disney film, only this one uses anthropomorphic animals. Through Allan-a-Dale the rooster, this movie started my fascination with wandering minstrel narrators. And while Allan-a-Dale is quite the treat, growing up, my favorite line actually came from Prince John, "SEIZE THE FAT ONE!"

My dad taught me to recognize the greatness that is Don Knotts. This is movie was one of my Father's lessons.


Nathan Hinds -
Besides "The Lion King" I haven't seen most of these films in a long time. I really need to go back and watch these to see how I feel about them now as an adult.

The only animated film that you can really classify as an epic. This film has it all - great cast, amazing score, and some of the most powerful scenes ever for an animated film. That stampede scene gives me goosebumps and makes me tear up every time. In case you were wondering, it's my favorite animated film ever.

Have some tissues ready when you watch this one.

One of the few animated movies that I will voluntarily decide to watch on my own every couple of years.

I couldn't tell you how many years it's been since I've seen this movie, but I watched this a lot when I was a kid. A term we use a lot is "pure friendship" and this one's got plenty to boot.

Even though this movie is called "101 Dalmatians", it's Cruella De Vil, that is the most memorable aspect of this film. She scared the crap out of me when I was a kid. On a side note, I was thinking how different my opinion of this movie would've been had they used cats instead of dogs; in that instance I'm pulling for Cruella.


So that's what we're looking at this week. Not really much of a surprise that the majority of the films on these lists take part before 1995. Even though there have been plenty of films from the genre in that time, as we stated at the beginning, this genre is probably the one most full of nostalgia, and there's no way not to love the films that we all grew up with. "The Lion King" shows up in this post as the most represented film. It appeared on all five lists, and was even the number one film for four of us. Not only was this film refreshing for the genre, it was also released during the perfect time in our lives, that 7-11 age range when we were still young enough to unconditionally appreciate these types of movies but also old enough to understand more of what was going on. Regardless of your age though, this film transcended most of the standards for the genre at the time and provided something inspiring for all ages. Whether we're talking specifically about the Animal genre or not, there's no doubt that this a must-see amongst animated films.

Otherwise, there was a lot of variety above, but "The Land Before Time" and "101 Dalmatians" did still manage to show up on three different lists. "101 Dalmatians" is the oldest dated film on any of the above lists, released in 1961. "The Land Before Time" is only from 1988, but might be one of the defining movies from our generation. "All Dogs Go to Heaven", "Rikki-Tikki-Tavi" and "Robin Hood" each appeared on two different lists, as the only other films with multiple selections.

As always, hopefully all of these film selections can help you to expand your knowledge and appreciation of some of the best films this genre has to offer, and guide you to better and more enjoyable all-around viewing experiences.