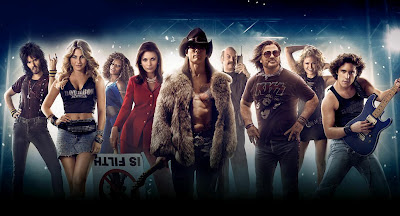 "Rock of Ages" offers up a theme centered around the latter stages of the Rock & Roll era of the 1980's. A plethora of songs from the time were remixed and re-imagined for the film, including pivotal plot developers Wanted Dead of Alive, Jukebox Hero, I Wanna Know What Love Is, and Don't Stop Believing. A handful of others were of course featured, but those stand out as the most significant to the plot of the film. The music of the time tied the whole thing together, but this one starts and stops with the various performances featured in the movie.

Director Adam Shankman isn't new to the genre, having previously tackled the 2007 version of "Hairspray". Though I never saw the film, it was met with overwhelmingly positive reviews. And while the actors and specific plots were different this time around, both films featured very similar themes. This newest film also brought in lead writer Justin Theroux for the script. Like Shankman, he has also established himself as one of the go-to talents in the industry, with previous hits like "Tropic Thunder" and "Iron Man 2" already under his belt. But the question still loomed: even with an experienced director and writer, and a bona fide cast in place, could they all pull it together and capture the essence and heart of this era?

As I stated, the performances really are where we need to start with this film (being a musical, with a lot of outward performances and physical acting - let alone singing - this should be no surprise). The two actors who the film's plot revolves around, Julianne Hough and Diego Boneta, definitely left a bit to be desired on the acting end of things. Don't get me wrong, they both had amazing voices that really complimented each other perfectly; none of their performance scenes gave me many issues. The problem was, they weren't singing the whole time. It felt like they got better as the film progressed (or maybe I just grew numb to it), but early on, their exchanges were, dare I say, almost cringe-worthy? I expected a bit more from Hough because she's already tackled this monster before ("Footloose", "Burlesque"), but even still, her beautiful voice was showcased and earned her a few bonus points. This looks like the first film role for Boneta, so I don't think we should be too hard on him personally. That of course doesn't excuse the studio for casting him in the first place though. He wasn't terrible, but between him and Hough, they were obvious shortcomings on the acting end of things.


Alec Baldwin and Russell Brand starred as a pair of old school rockers, refusing to let go of the era. Baldwin was a club owner, while Brand a faithful employee and cohort. What I loved about these two was how much fun it felt like they had with these characters (with a final scene really capping-off the absurdity and silliness - in a fun way - of their characters). They didn't really have a ton to offer to the plot, but I enjoyed their personalities. Catherine Zeta-Jones played a woman in complete opposition to everything rock music stood for. While an incredibly cold and impersonal woman in the majority of the film, I actually quite enjoyed what she had to offer. You could almost see her hatred seeping out of her. It's probably easy to assume with this upcoming sentence (and hopefully doesn't make for too much of a spoiler), though there's no more elegant way to hint around it, the 180-degree turn her character takes at the very end felt way too abrupt to me (though when you see the film, of course you get the reasoning). The person most worth talking about here though is Tom Cruise. Cruise starred as one of the biggest rock icons of the era, and fully embraced the exuberance of this larger-than-life persona. Going into the film, I just thought it was going to be fun seeing Cruise as a rock legend, singing on stage. But after viewing, I was really impressed with what Cruise was able to do with this character. I imagine that a lot of the layers he showed were so much more than what was originally expected. His scenes are of course filled with absurd over-the-top moments, but I can only assume as to how accurate that probably was to the time. Though every scene with Cruise as the abounding Stacee Jaxx is a treat, his duet with Malin Akerman of I Wanna Know What Love Is is fantastic/ridiculous/emotional/absurd, all wrapped into one neat package. Don't just take that scene for what you're looking at - there are some deeper issues happening there than you might think.

While I'm not necessarily trying to say that his performance is or will be one of the best of the year, I wouldn't be surprised if Tom Cruise gets some Oscar attention before all is said and done. The last time Cruise was nominated for an acting award was in 2000 for "Magnolia". I think the Academy would love to nominate him again, and this seems like it could be just the niche performance to get him back in that spotlight (I immidiately think of Robert Downey, Jr. in "Tropic Thunder". Similar situation, I think). Time will tell, of course, but I think this has just the right pieces to get that kind of attention.

As I stated in the intro, there were a few songs that stood out as the ones that the film was probably based itself around, but almost every selection fit the film well, and was performed respectably. In this department, where I feel the film fails is its tiresome second act. We're greeted with a variety of rock ballads (music I'm not typically a big fan of, regardless) and character storylines that do little for the film but to set up for a fantastical reunion at the end. I cared very little about the pointless tragedies here, and it only hurt the film more that the music associated with the necessary scenes was generally lulling. The film starts out with a bang, getting pretty much every prominent character into the fold quickly, then, while not quite as devastating as I make it sound, feels like I'm suddenly just waiting around for 45 minutes for them to wrap it all up and really drive the thing home. Again, it was Stacee Jaxx who managed to salvage the second act at all, providing one of the best performances of the film with Pour Some Sugar on Me. The scene associated with that song was excessive in every way. I really enjoyed it. All of that being said though, I really do feel that, overall, most of the songs/scenes missed with something. I was constantly tapping my feet and wanting to sing along, but I think the only performance that really had me an awe and gave me chills was Wanted Dead or Alive. Otherwise, it all fell just a bit flat; I always just wanted a little more. With such great songs and material to work with, I really felt like I should have been rocking and unable to control myself the whole time. I don't think the film ever reached those levels.

I think I might have more opinions on the overall imagery and styles of the film if I was just a tad older, but from my perspective, everything seemed pretty well done. Other than Jaxx's character, there wasn't as much flash in the film as I would have expected. I feel like I did want a little more in this department somehow. I'm not sure what that might have equaled to, but it just didn't feel as stylized for the era as I wanted - it's a musical, everything's supposed to be just a little bit over-the-top, right? We get it with Jaxx, but not many others. Though I guess that could have been the point, with Jaxx playing a character that literally everyone else in the film feared or worshiped; that did make his personality stand out more. Did I just talk myself into not having issues with the design of the film?

What this one ultimately comes down to is your tolerance for musicals and the era itself. There were problems with the acting and the pacing, sure, but overall it was enjoyable. There were times when songs would be featured where I found myself wanting to just go listen to the original recording instead, but I didn't think any did any major injustices. I honestly think that this film has more to offer than what you can see on the surface, too. Maybe I'm reading into it too much, but I think there are moments when this is actually a pretty smart movie; there are a lot of layers with a variety of characters which lend itself to maybe a more ironic and heartfelt film that what you might think. It's constantly silly and cheesy, but surely it knows that. I don't feel that other than with a few Tom Cruise scenes it ever takes itself seriously, and as long as you can get on board with some of the ridiculous developments of the film and not try to over-analyze too much, there's a good amount of fun to be had. It is a musical, remember, and the style of the genre is very much exaggerated and external.

The film has flaws, and I guarantee you're not going to be rocking out on your air guitar throughout the whole film much like I was hoping for, but the film definitely has its moments. I think that that the film is a bit too long for its own good, and that second act will ultimately be its downfall for repetitive viewings, but I think this is definitely worth a shot for at least one go-around in theaters. It's fun and has a few scenes that make it worth the watch. Don't expect one of the greatest hits from the genre, but expect an entertaining romp. 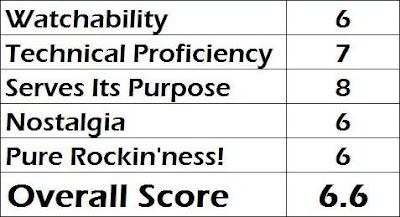