Posted by Unknown on June 14, 2012
Recently, in France, a find was made by Marc Azéma of the University of Toulouse–Le Mirail consisting of cave drawings, made over 30,000 years ago, with cartoons on them! The moving effect is created by superimposing figures in moving poses then darkening the area and holding a torch to it. The flicker effect makes the image seems to move! While searching for these paintings they realized that there were more instances of what they had originally believed to have been poor quality drawings. Many cave drawings have multiple images of the same animal drawn over and over again in almost exactly the same spot. Until now, researchers simply thought that prehistoric man was simply a faulty artist. 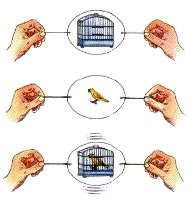 In the same line of news researchers discovered a disc made out of bone with pictures of animals on it. Many thought it to be a simple decoration or button to wear on clothing but when pivoted on its center by string and spun it becomes a very early representation of a thaumatrope. The thaumatrope was created in 1825 by John Hershel, many associate its beginnings with the soon to follow invention of moving pictures, aka movies. Perhaps "cavemen" weren't so stupid after all; perhaps we owe prehistoric man the honor of inventing film? It's an exciting discovery and one i will be following to see what people come up with. It sure would be an interesting thing to have the origin of film be right there with the origin of man.

This is a video of the process used to animate cave art.

What do you guys think of the subject? I would love to go back and fourth with a few people discussing something like this!