Posted by Unknown on May 02, 2012
With this weekend's release of "The Avengers", it obviously gave us plenty of options to choose from for our weekly Top 5 list. But after going through all of the different options, we decided to go with an actor who's maybe not getting quite as much attention as some of his other co-stars right now. And regardless, Samuel L. Jackson has been a staple in the movie industry since the early 90's, and we couldn't pass on the chance to honor one of the more fun actors in the business. 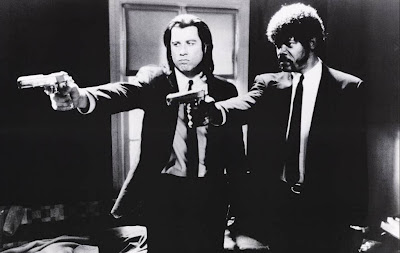 Jackson, who didn't really start acting until college, came about it by unique circumstances. Throughout his entire childhood and through most of college he suffered from a stutter. And it wasn't until a speech therapist suggested that he audition for a play (a common step in curing stutters) that he ever put any thought into acting. He did audition of course, and soon after he changed his major. Still, it took a long time for Jackson to make it in Hollywood, as he was already 40-years old when he started getting some of his first minor film roles.

The hard work paid off though, as Jackson is now one of the most well-known actors of our generation.

Check out our full lists after the break, featuring some of the greatest titles from this actor's career!

Alex Schopp -
My biggest surprise is that "Unbreakable" didn't make it on this list. I don't know, I like the movie, but maybe I'm just watching it more for Bruce Willis' character than I am Jackson's? Regardless, at least I got one Willis-Jackson combo on here!


I sometimes grow tired of this movie due to its extreme popularity, but every couple of years I remember how great this movie really is and I need to go back and watch it. And Samuel L. Jackson is one of the best parts of this film.

Great team-up here! Plus this is the best all-around Die Hard movie anyway. It's just a fun, easy-to-watch action movie. Plus if I ever had to deal with a terrorist situation, I'd hope his evil plot would revolve around me solving riddles too.

This movie is unique and interesting to begin with, but in my opinion this is one of the better performances I've seen out of Jackson; and a role pretty unlike most others he's taken.

Fantastic spoof comedy - one of my all-time favorites. Sam Jackson and Emilio Estevez are great in the lead roles, and there are tons of really great cameos featured throughout. If you want a cheap laugh or two, this movie won't disappoint.

Great ensemble cast for one of John Grisham's better adaptations (in my opinion). Compelling drama, with lots of likeable/rootable characters.

Talk about a breakout role!

Where is that sequel?

One of the best high-school thrillers.


Derek Clem -
I'm not fully sure what my ranking system is based on with this list. These movies just feel right in this order. What I do know, in order to be considered, Jackson must play a lead or co-lead character, hence no "Jurassic Park".

Such a different Samuel L. Jackson than we tend to see.

This movie is highly underrated and features a great blues soundtrack.

The Samuel L. Jackson we all know and love.

I've always thought this movie is great. Even though Sam Jackson is barely in the movie, I still thought his role was awesome; his role really gave me the creeps.

This movie is a blast!

This is my favorite Sam Jackson performance.

I'll give the Bible one thing, its verses sure do sound epic when said before an execution.

I've always thought this was a very underrated sports movie.


Andy Schopp -
What do you say about Sam Jackson other than that he embodies exactly what it means to be a bad-ass? He does it and does it well.

This might seem like an odd selection, but I couldn't pass it up based entirely on his speech in this movie. Even people who haven't seen this movie know the speech.


So there we have it. Our favorite Samuel L. Jackson movies. No surprise as to the big winner here: "Pulp Fiction". It was an easy selection and it showed up on all five lists. It truly is one of the great performances of this actor's career, and easily a good starting point when taking in his filmography. Going in, it seemed like this could be a possible contender for the Slackers Shrine, but only showing up in the top spot on two of the lists, so far it's proven to be an extremely difficult status to achieve. "Black Snake Moan" was a solid runner-up, appearing on four of the five lists. This is an interesting film and features a very raw Samuel L. Jackson. The performance was clearly appreciated by this staff as many listed it as a top recommendation. Outside of the those two, other films making multiple appearances included "Unbreakable", which was the lone film showing up on three lists; such a unique take on the superhero genre. "Die Hard: With a Vengeance", "Loaded Weapon 1", and "187" were the only other films with multiple entries, each hitting on two lists.

Hopefully these film selections help you to expand your knowledge of Samuel L. Jackson's filmography and guide you to better and more enjoyable viewing experiences all-around.