Posted by Unknown on May 19, 2012
With this week's release of "The Dictator", we decided to share some of our own favorite political comedy films. Political comedies have been a staple in Hollywood since the first film studio landed there in 1909. Obviously filmmaking was quite different back then and I can assure you that none of our selections below are quite so nostalgic, but nonetheless, since its inception, Political Films, and comedies specifically, have been a mainstay to the medium. 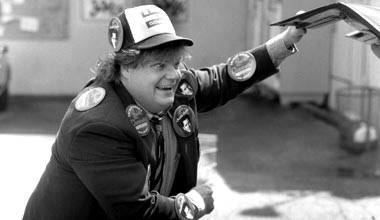 This was another one of those weeks where, all around, it just didn't seem like there were massive amounts of films to consider. While if we wanted to get creative with the category, I'm sure there would have been a lot more options out there, but the majority of the selections below are pretty straight-forward, and films that we feel best hold to this category. All of the films listed after the break are quality films that we're happy to share with you and that we feel are staples for the genre.

So hit the jump and check out all of our favorites!

Alex Schopp -
I was kind of surprised by the lack of overall Political Comedies that there were. The ones at the top of my list I really like, but I have very little connection with the ones after that. Plus, maybe my first list ever that I'm just not inspired to write descriptions for these films. These are all solid movies of this genre that you should check out, I'm just not passionate about any of them.


Ben Foutch -
I'm not huge on political comedies, but these always make me laugh.


I caught the middle of this movie once on a movie channel on televison. I about died laghing so hard. I then made sure to DVR it the next time it was on. Hilarious! Albert Brooks is superb at comedy.

The moment I saw this film, it became one of my all time favorite comedies period. And I instantly became a fan of the Marx Bros.

It's a stretch, but there are plenty of political bits to it. Can't beat his speech at that rodeo, one of my all time favorite comedic moments.


Andy Schopp -
If you haven't seen "Black Sheep", then you must have just recently been born! It's a great and iconic movie!


So there we have it. These are what we see as the best Political Comedy Films around! As has been the case a few times in the past, with such a specific criteria, it isn't as impressive just looking at the films with multiple appearances - the favorites are generally favorites by all. I'm still happy to say that films like "Black Sheep" and "Thank You For Smoking" showed up on four of the five lists this week, "Dr. Strangelove" on three, and "Wag the Dog", "Election" and "Canadian Bacon" on two apiece.

But otherwise, what's more interesting here is the composite rankings that the top films held, which does a better job of showing off which films, collectively, we truly felt were the best for the genre. We'll only worry about the films that appeared on the most lists, but of those two, "Black Sheep" was easily the highest thought-of film, hitting in the #1 spot on two of the lists, and garnering a composite of 2.3. The other film showing up on four lists, "Thank You For Smoking", had an average ranking of 3.5. Regardless of the rankings and numbers though, we still encourage you to check out all of the films above, as we consider each of them some of the best for the genre.

As always, hopefully all of these film selections can help you to expand your knowledge on some of the best films this genre has to offer, and guide you to better and more enjoyable all-around viewing experiences.