New Clips from "Prometheus" and "The Amazing Spider-Man" 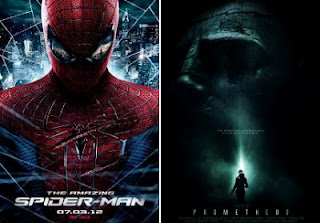 Well, if you haven't seen enough from either of these films yet, today we get more brand new footage from both. Both films are set for a release in the next couple of months and I guess they just want you to know EXACTLY what you'll be seeing come opening weekend (maybe it's not new, but what feels like a newer marketing trend by Hollywood to completely over-expose us to these films is really starting to annoy me; oh, the simpler days before the internet...).

The first, a clip from "Prometheus" isn't too spoiler-riddled. It's only a minute long and is really just longer cuts of previous snippets we've already seen. The scene shows the ship landing on the planet, mostly just showing off some of the effects of the ship and detail of the alien planet. It's a nice video and one safe for viewing.

The second, from "The Amazing Spider-Man" is much more extravagant piece. It's a 4-minute "Super Preview". At first, I was really hesitant to watch this - I've seen enough to know I'll be interested in this film, I didn't want to take in a full four minutes from the film. But since I was posting about it, I felt I needed to. And to be honest, there are a few new scenes, but ultimately, it's pretty much just a huge compilation of previous material. I will say though that I loved seeing the big picture all wrapped into one "trailer". I thought this was a great look into the film. And if you've seen all of the other promotional material for the film, I don't think you'll do yourself much harm by watching this.

Anyway, check them both out after the break.

What do you guys think about these clips? Too much information? Just enough to pique your interest even more?
Movie Trailer