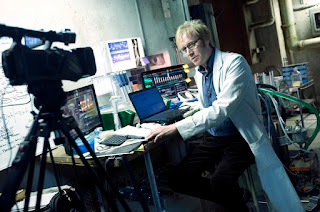 A new clip has recently released for the upcoming "The Amazing Spider-Man", that features various members of the film, including actor Rhys Ifans and director Marc Webb, talking about the production of the film and the character of Dr. Curt Connors/The Lizard. It's no surprise at this point that Connors/The Lizard will be the villain, as much has already been released teasing at the doctor's alter-ego.But in this clip, we see some of the best Connors-to-Lizard footage so far. It still doesn't give too much away, but if you're a purist who's trying to avoid pre-viewing "spoilers", you may want to tread lightly with this one. And don't be too worried about it, the majority of the video is behind-the-scenes talk with just a few snippets from the film.The footage looks good though, and I like what I see here; I think this character could end up being one of my favorites from the film.Check it out after the break.

Since you're here, I'd imagine you gave in and watched the video. What do you think? Like I said above, I think the footage looks pretty good, and I'm very interested to see this film for the entire evolution - both physically and emotionally - of this character.
"The Amazing Spider-Man" is set to hit theaters July 3, 2012.