Posted by Unknown on April 04, 2012
With this week's edition of the Top 5 Movie Guide we decided to offer a slightly different perspective. Up until now the weekday edition of this post has always focused on a particular actor or actress. And while that's been the basic plan, we've also wanted to find ways to work in other kinds of film artists as well, like directors and music composers. Neither of the last two offer quite as much variety as we get with actors, so we definitely won't be able to do those quite as much. But it just so happens, that with this week's re-release of "Titanic" in 3D, composer James Horner is back in the spotlight. Most of you will surely recognize the popular song that he composed for Celine Dion for the film, but you might not be quite as familiar with a lot of the other films he's worked on. 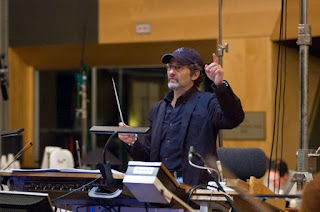 Horner's had an amazing career that's spanned over 30 years. He's worked on a variety of different projects featuring many different themes and genres. For those familiar with the artist, his work is unmistakable, and he easily sits at the top of the composing world with a limited few other artists.

After the break, check out which films, featuring the composer's work, rank among our favorites. And as a bonus, click on each of the titles in our lists for the actual music that inspired the picks.


Alex Schopp -
For my list I first started by jotting down all of my favorite movies that Horner was the composer for. From that selection of 10-12 films, I weighed score and overall enjoyment to get to my five. From there I pretty much put them in order based on the composition.


In my opinion one of the greatest soundtracks of all time. If this doesn't move you than I don't know what will. It's beautiful and epic and elegant. Perfect.


I love how unique this is compared to his other work. You can feel it's him in there, but it's so different. Plus the movie is great and super nostalgic!


The music in this film really sets the tone for the whole thing. Very dramatic and tense when it needs to be.


I love the movie, and I think the music plays to it perfectly. Whimsical and also strong. Plus I'd recommend starting this link right around the 1:20 mark.


I live in Montana now, how can I not show this film some love? Great dramatic character piece though with great music to boot! Also, this gets good around the 30-second mark.


Ben Foutch -
These are ranked by film (Watchability/Nostalgia), not necessarily by composition.


Derek Clem -
I did my best in attempting to rank these on how much i liked the score in conjunction with the film. If i was going by just the movie or just the score, the ranking and movies included in the lists would be different. Also, since "Titanic" is the inspiration for this list, I chose not to consider it...because it's obvious we like it.


The emotional journey the score creates in this scene starting at anxiety, to possible defeat, to hope, to celebratory, and finally to elated assurance is nothing short of masterful.


And you thought John Williams was the only epic composer out there. Where have all the epic composers gone? They just don't make them like this anymore. The music definitely makes the movie much better than it is, and that's always an impressive achievement. This score is so good that it gets a few bonus points outside of its conjunction with the movie.


You spend the movie listening to beautiful variations of the iconic main theme and I feel like the sample above provides a moment where the score and visuals really work well together hitting you with sentiment. As Wallace rides off, the score continues over a montage quite effectively.


This track alone has me constantly wondering if James Horner should have walked away with the Oscar over Howard Shore for LOTR:FOTR. So, so, so hauntingly beautiful.


The fusion between ethereal ghostly and angelic moods in the score elevates this, what i didn't recognize as a kid, terrible movie.


Nathan Hinds -
This list is based on the music featured in the films.


Okay this one might not have to do with the music, but I couldn't leave it off.


Andy Schopp -
These are the soundtracks to my life!

So there we have it. Our favorite films featuring the musical scores of James Horner. I know this is a unique take on these lists, and it's a little different jumping into a film for the score, but if you're looking for first-class work from one of the best in the business, these films are a great place to start. And with a master that has so many different films behind his name, it's no surprise for the variety this week. Nothing dominated, but there were plenty of repeat selections. "Braveheart" and "A Beautiful Mind" made the most appearances, each hitting on three of the five lists. Then there were a slew of movies making two appearances, including "Honey, I Shrunk the Kids", "Titanic", "Aliens", "Searching for Bobby Fischer", and "Commando". Otherwise, a lot of gems that we all hope you one day get the chance to check out.

But other than these films, which ones are your favorites that feature the score of James Horner? And who's list above do you think captures the artist the best?


As always, we hope these lists help you further your movie knowledge, especially, in this case, on the composition end.