Posted by Unknown on April 07, 2012
With the genre portion of this week's installment, we were again inspired by the re-release of "Titanic" in 3D (and also that we've already done party movies, so "American Reunion" had little else to offer). There are a few different angles you could take trying to interpret a theme from the film, but ultimately, we left it open to provide a little variety, and simply went with Films at Sea. This can include, but is not limited to, on the water, over the water, and/or under the water. As a bonus, I guess "Titanic" technically qualifies for two of those categories! Too soon? 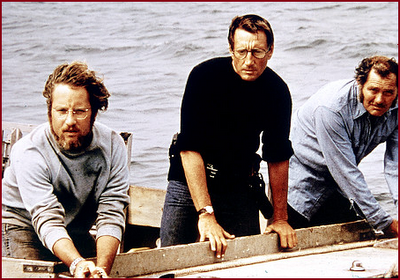 So if you've ever wondered what the best movies were that revolve around the open water, check below for some fine choices!

Alex Schopp -
I really wanted to include "Creature from the Black Lagoon", since it's always been my favorite of the black and white monster movies, but alas, a lagoon just barely misses on qualification as a "sea"...


There are always going to be movies that pop up in some of these lists that, before looking, you can say 'this will for sure be near the top of every single list'. This is one of those movies. It just has to happen, no way around it. Plus, as much as it's given sharks a bad name, has there ever been a movie that's taken a real life thing and turned it into such a culturally-accepted monster? I wish I were around before this film came out, just so I could know what people thought about sharks. I bet we were completely indifferent.


Great story, featuring some of my favorite actors. It amazes me that some people really do this sort of thing for their job.


This movie gets a terrible rap. I'm not saying it's the greatest movie ever made, but it's a pretty cool take on the post-apocalyptic genre - totally unique to anything else we ever really think about as a possibility. And it's as water-centric as they come!


I probably watched this film a hundred times on TV when I was younger. I always thought it was a perfect blend of creepy and action. I think even to this day if I was flipping through and saw it on I'd watch it.


As if large bodies of water weren't scary enough...


A combination of H.P. Lovecraft and Stuart Gordon. Doesn't get much better.


Derek Clem -
In order to help me whittle down to five selections, I put some major constraints on myself. These are movies that have key scenes that take place in or on the ocean and the boat must have a crew. Sorry Tom Hanks, I'm not counting Wilson as a crew member. And again, with "Titanic" being the inspiration, I chose not to include it in my list.


Not only do you get to watch this boat story take place you also get to hear Quint's chilling memory from The Indianapolis.


James Cameron really loves the ocean. I can't wait to see the oceans of Pandora in upcoming Avatar films.


RoboCop and Ghostbuster Winston in a movie together? Yep! and guess what... Daniel Stern is in it too! I never knew the name of this movie until I got older and had the internet to research and rediscover this childhood favorite.


There are about a million versions of this movie you can watch. This one holds the most epic cast. Mel Gibson, Anthony Hopkins, Laurence Olivier, Daniel Day-Lewis, Bernard Hill, Liam Neeson, and an endless amount of Tahitian women.

Loved seeing this in theaters again. The special-effects still hold up great today.

This movie kind of got pushed to the back-burner in 2003 thanks to Pirates and Lord of the Rings, but this is a really fantastic adventure movie.

Steven Spielberg is the Greatest Director Ever. Period. The guy has a top 3 film in just about every genre there is.

This was the first film I ever saw in IMAX. Since then, it's always been a movie I can sit down and watch whenever its on TV.


Andy Schopp -
These movies most represent what a movie on the water is and should be. Now, before people start saying "where's 'Pirates', and what happened to 'Captain Ron' and 'The Abyss'?!", I just want to say, yes I love those movies and they were all definitely in the running. I was just looking for a broader spectrum of water-based movies with a very specific criteria. Also, make your own list if you want those movies in it!


So there you have it. Our favorite examples of movies that take place in/over/under the sea. And as always, we have our winners, or, the collective strongest representations for the criteria. This week, not much of a surprise: Steven Spielberg's "Jaws" showed up on all five lists. This is as classic as they come, and for just about every person on the planet, movies involving the sea start with this one. Plus a lot of people forget to give this movie credit for jump-starting the modern day blockbuster - they want to jump right to "Star Wars". And as much as we love that film, we need to give credit where credit is due. Otherwise, very surprisingly, "Waterworld" made three appearances, along with "The Abyss". I don't think anyone's ever going to say these films are on the same level, but when it comes to flat-out enjoyment for the genre, there truly is some value in a film like "Waterworld". "The Life Aquatic With Steve Zissou" and "The Perfect Storm" were the only other repeats, each hitting on two of the five lists.

Hopefully these films help you to expand your movie knowledge in the Oceans and Deep Sea department - we know you've been yearning for it! As is with all of these posts, we encourage you to check out all of the above-referenced films, as they may help guide you through this unique genre of cinema.