Posted by Unknown on April 11, 2012
In this week's edition of the Top 5 Movie Guide, we make our first plunge into that of a director - or in this case, directors. Peter and Bobby Farrelly have been directing comedies since the mid-90's, and while some of their more recent pictures haven't been quite as iconic as their earlier work, they've still combined for an overall impressive filmography, with many films that are still considered classics of the genre to this day. Their most recent venture, and the one that spurred this list, is the upcoming "The Three Stooges". I think most will preemptively agree that their newest film won't end up atop many best-of lists anytime soon, but who knows. 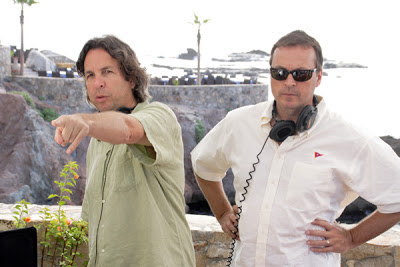 Also, as a quick precursor, when it comes to lists revolving around directors or maybe even newer actors and actresses, of course there isn't always going to be the most variety. Unfortunately not every list can always be unique and eclectic across the board, but we still hope that you can take value out of any group of lists provided, even if they don't offer as broad a range of titles. Today, that's the case with these selections. The Farrelly Brothers have done a lot of great work, but it's not as extensive as some of the other subjects we've focused on. So in this case, as it surely will be with other lists down the road, it's more about the order than the different films; which films consistently rank higher than others.

So without further ado, check out below for our favorite Farrelly Brothers films!


Alex -Schopp -
Pretty easy to just base this list completely off watchability.


Woody Harrelson, Randy Quiad, and Bill Murray all in some of their best roles to date. Plus it's semi about sports, which is cool. This film features my favorite tone of any Farrelly Brothers movie, and I think I could consistently watch this film more than any of the others below.

Jim Carrey in better form, in my opinion, than the film many usually want to go to first (the title below). I didn't get this movie when I was younger, but I watched it again as an adult and there's so much to appreciate about it. Plus the scene when he gets extreme cotton mouth is still so tough to watch. Someone get the man a glass of water!

This classic comedy is still great, and would be higher on my list except that I'm just not a huge fan of stupid comedy - at least not regularly. The style is done so much better than most with this film, it just went up against two great films above. My top three could all be in a first-place tie though and I wouldn't have a problem with it.

I just never really got into this movie. I mean, I enjoyed it when I watched it, I just never loved it. It might have a lot to do with the fact that I've never been a big Cameron Diaz fan.

Matt Damon is one of my favorite actors of all-time. I loved seeing him in such a silly role. Him and Greg Kinnear play off of each other perfectly.


Derek Clem -
Looks like they've maintained a steady decline as the years have passed. I wish I had seen "Kingpin" more than once. I know its reputation is great and I liked my initial viewing, but I just don't have enough of the movie logged in my memory to consider it for my list.

Jim Carrey was my hero at this point in my life, and to an extent, still is today.

My all-time favorite comedy; it never gets old. Anytime I need a good 90-minutes of nonstop laughs, I know I can turn to this film.

I've always said I wish Matt Damon would throw a good comedy in his lineup every now and then. This movie is why.

The only other movie besides this that I've seen from this duo is "Me, Myself, and Irene", and I can't stand Renee Zellweger. So "Osmosis Jones" won by default.


Andy Schopp -
Outside of my top two selections, the rest of these mean very little to me and are basically thrown in without much interest in their order. They're good comedies, I just don't care that much about them.


So there we have it. The best movies, in the Slackers' eyes, directed by the Farrelly Brothers. As was stated at the beginning, the filmography wasn't as extensive as some of the other lists we've done, but nonetheless, we hope there's value in the titles listed above. As we said, in cases like this, it's the rankings that start to matter more than the overall variety of the films. No surprise, "Dumb & Dumber" and "There's Something About Mary" showed up on every list - and in what was a surprise, they're the only films that did. "Dumb & Dumber" is still the big winner though, coming in at the number one spot on all lists but one. There's no doubt that if you're diving into the Farrelly Brothers' filmography, this is where to start. "There's Something About Mary" also showed up on all five lists, but had an average ranking of 3.4. We enjoyed it, one way or another though, it just wasn't one of our favorites - use that term pretty lightly, as we're discussing Top 5 lists...

From there, there were four different films with three selections apiece: "Kingpin" (average ranking 1.6), "Me, Myself & Irene" (2.6), "Shallow Hal" (3.6), and "Stuck on You" (4.3). "Kingpin" is the winner of that crowd, appearing near the top of all lists. It was either a big favorite or not one at all. And the only other film making multiple appearances was the big surprise, "Osmosis Jones", with two. Who would have guessed.

Thanks for checking out this week's edition. We hope there's value for you in these selections, and you use the information to help broaden your Farrelly Brothers film knowledge. And even if you've seen some of the top picks, it might not be a bad idea to go back and revisit them. They're all great comedy movies, always good for a few laughs.