The Slackers Are Going to Ebertfest! 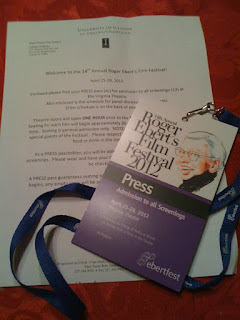 It's pretty exciting times over here at the Slackers Selection Movie Blog! We're really just starting to get into our rhythm with the site, but already our hard work is paying off. In what is already our biggest accomplishment and bit of news for the site, we've recently been invited to attend the upcoming Ebertfest Film Festival as members of the Press! This is our site's first festival as official members of the press, so we're really looking forward to providing you with massive amounts of exclusive first-hand coverage throughout the event.

For those of you who aren't familiar with the event, Ebertfest is an annual film festival held every April in Champaign, Illinois at the iconic Virginia Theatre. It's put on by Roger Ebert himself (as he's a graduate of the University of Illinois located in the same town), and always attracts a variety of filmmakers and special guests. The event, which was once called Roger Ebert's Overlooked Film Festival, was initially put together by Ebert to showcase films in which he felt had not been given enough attention from the media, the public or even distributors. The name has since been trimmed up, but the philosophy behind the festival remains the same.

Check out a continued breakdown of the festival after the break, detailing which films will be screening, who will be attending each event from our staff, and what kind of coverage to expect throughout.

There are five days to the event, Wednesday (4/25) through Sunday (4/29). Each day features a variety of showcased films, along with a representative from the project - actor, director, writer, producer, etc. - for discussion panels with the media and fans alike.

Unfortunately, Nathan Hinds and I, Alex Schopp, moved out of state just a little too soon and will not be attending any of the festivities. But that's the beauty of having a powerhouse of five contributing writers on the staff - that still leaves three members in the area to cover the entire event. So Ben Foutch, Derek Clem, and Andy Schopp will be your eyes into the festival, and will provide daily coverage of the goings-on and their noteworthy experiences.

You can check out the official lineup of films and guests on the website, and we'll go over some of the more notable events below, but more than anything, I'd recommend just sitting back and waiting for the full-on coverage from every facet of the festival, provided daily by our three writers.

This is what we have outlined right now. There's always a chance some of this can change, but generally, expect coverage on each of these events from the associated writer. Our plan is to cover the general ambiance of each event, our general reactions to the film screening, details on the persons in attendance, what the notable moments of each event were, and hopefully, exclusive interviews and interactions between some of the featured guests.

So strap yourselves in for the event as we prepare to bring all of this coverage to you as it happens! Be sure to check in daily for all of the newest updates and information, and hopefully our blog will provide you material not found anywhere else on the web!
Alex Schopp Ebertfest Film Festival