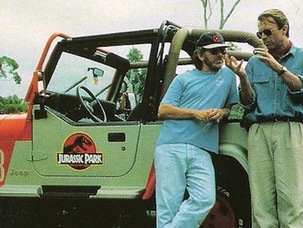 As most all of you know by now, "Jurassic Park" is my favorite film of all-time. It's the perfect combination for a film - always easy to watch, technically amazing, good characters, great story, thrilling, etc., etc. So anytime I come across info on the film, I feel the need to share it.

Check out the video after the break.

What do you guys think of the video? I'm confident I could watch an entire film that was just showing this type of stuff. There's something magical about watching Spielberg direct. And he's such a class act. I bet it would be awesome working with him.