The Next Day... The American Pie Franchise (Also, Spider-Man and The Breakfast Club) 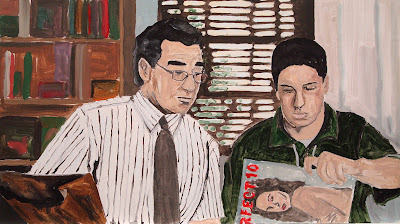 Welcome to The Next Day... A reoccurring post exploring ideas on what may follow in the diegesis of a movie once the film has ended. I suppose these ideas could be classified fan-fiction, but lets not call it that.

Don’t expect The Next Day articles to be limited to only providing possibilities on what happens the literal next day in the movie. Days, weeks, months or years down the road, or even seconds for that matter, will all be explorations taking place under this banner. Some articles may be presented as actual sequel ideas, such as the American Pie related write up below.

Before I dive into The Next Day of the American Pie franchise, I'll provide a little back-story on the genesis of this project after the jump.

My interest in developing possible follow-ups to movies may have started with my disappointment of Spider-Man 3. I was severely underwhelmed by the movie. I do think, however, the movie succeeded in the aspects regarding Peter Parker and Harry Osborn’s relationship, but that’s a discussion for a different post. Anyway, after watching Spider-Man 3 I got to thinking, how can they fix this franchise? Easy! The Dr. Conners storyline they’ve alluded to in all three films should finally take shape. Here's what I'd do...

Dr. Conners transforms into Lizard. He destroys New York. Kraven The Hunter hears about it and heads to New York to hunt Lizard. Spiderman has to save Dr. Conners from Kraven. Kraven finds Spiderman a more worthy Hunt. Dr. Conners finds his humanity, and an epic team up against Kraven takes place. Spidey and Lizard win. Peter cures Dr. Conners. End. An epic movie in the books.

I believe my interest peaked in creating "next day" stories after rewatching The Breakfast Club a year or so ago with some friends. I asked everyone what he or she think happened the next day (hence the name of this new feature on the blog) the kids went to school? Were they all friends? Basically asking the same question Michael Anthony Hall’s character Brian asks in the movie. I had a very pessimistic outlook on their future while others adhered to the ending of the movie and felt the characters were all changed and new people. Here’s what I think…

Brian, Andrew, Allison, and Bender arrive to school around the same and make some friendly conversation in the hallways before class starts. All seems to be going well. The bell rings and they part ways to head to their classes. Claire and some of her girlfriends skipped first period and walk into school together during the passing period before the second class of the day starts. Brian happens to be in the same hallway as Claire. He tries to make eye contact with her but its obvious she’s avoiding him on purpose. He looses his confidence to speak to her and walks away. Claire is still in the hallway talking to her girlfriends when along comes Bender. He rushes up to Claire sneaks up behind her and plants a kiss on her cheek. Embarrassed of what her friends might think she quickly wipes her face and screams, “Get away you freak!” Bender calls her a skank, flips her two birds, and storms off and never attempts to befriend any of his detention mates again.
Andrew maintains his friendship with Brian and dates Allison at the expense of losing most of his jock friends. Andrew still speaks with Claire civilly but is very disappointed in her when he catches wind of how she responded to Bender’s kiss.

Basically I think Claire ruins the possibility of them all being friends and her betrayal towards Bender sends him down a self destructive path that only reinforces his impulse to never trust or maintain any close friendships.

Now, back to why we’re here. I don’t think I realized how much I valued the American Pie franchise until I watched American Reunion. I really hope this movie isn't a true "one last time" get together. The end of the movie does imply after all, they plan to meet up more regularly. I for one know I’d like to see further sequels. Honestly, I’d like to see a movie with these characters every 3-10 years till they're all dead. I think it would make for a great cinematic exercise/experiment, solidifying a place for this franchise in film history.

Id like the initial follow-up to American Reunion to be a smaller venture that calls back to American Pie 2. It could be called "American Outdoors". A Summer themed movie featuring only the main guys, taking place the summer following their 13 year high school reunion at the beach house from the second movie or maybe somewhere else where they embark on a canoe/kayak trip.
Maybe a movie featuring only the women taking place the exact same time could come out a month apart from this movie in a Flags of our Fathers/Letters from Iwo Jima kind of way. One ending scene could be filmed and used for both movies showing each party returning home to their families.

The next movie in the franchise could be titled "American Families". It should take place the next day ALL the characters made famous in the first film get around to meeting up again. Maybe take away some of the raunch and let the characters grow up a little bit with the audience. Perhaps the characters meet up for a picnic weekend during a homecoming in their hometown. Most of them married with children (except Stifler, of course). Maybe Kevin is divorced with no kids and Vicky is divorced with kids and the story could revolve around them as the central characters. This film could be when the two figure out they’re really meant to spend their lives together. A mini side plot could arise where Jim and Michelle’s son has a crush on Oz and Heather’s daughter? Basically have this movie be a better version of Grown Ups.

A follow-up to "American Families" could be called "American Love" or "American Commitment" where Stifler finally grows up and finds true love. This movie could be revolved around his wedding much in the style of American Wedding, only it’s a more impressive feat because the untamable man is finally settling down.

Five years down the road throw another sequel out there. Maybe a generic throw away sequel where the men want to get away from their families for a weekend and go to Vegas. Essentially ripping off the happenings in The Hangover minus the wedding. We’ll call it "American Getaway".

Then another sequel can happen where the now very established families can get together to take a summer cruise to The Caribbean. All the cast members made famous in the first film should come back for this one. Maybe the cruise ship could be hosting another high school reunion, making it plausible that even secondary characters make it on the ship as well. We’ll call it "American Voyage".

Around this point we are in need of a more serious installment to the franchise. Kill one of the central characters off; lets say Finch or Michelle. Maybe a side character death like Sherminator could do the trick. The model for this movie should resemble The Big Chill. We’ll call it "American Funeral".

For the final film in the franchise lets put the characters in their late 70’s or early 80’s and in a nursing home together. Stifler is obviously going to be a dirty old man to all the nurses in this movie. The final scene after the credits could be all of them flat lining peacefully in their beds next to each other. We all cry. It could be called "American Geriatric" or return to the titular well and call it "American Pie".

So there you have it, the future of the American Pie crew. If  7 or 8 extra installments aren’t enough perhaps a few other throwaway generic sequels could be thrown in the mix. These are just some ideas I’ve had on how this group of friends may take efforts to maintain their friendships. How do you see their future unfolding? Feel free to comment on the future of Raimi Spider-Man and The Breakfast Club as well.
Derek Clem The Next Day