Movie Review: "Wrath of the Titans" by Alex Schopp 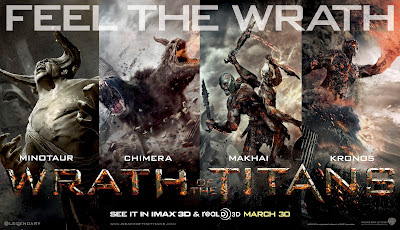 Yesterday I went and checked out the latest installment of the Titans franchise. I've been trying to let the film sink in before writing anything, because I can't remember how quickly we realized two years ago that "Clash of the Titans" wasn't very good. It's a classic movie theater tale, and one that all of us have fallen for at some point or another. Was the film we just saw good, or were the grand visuals and epic storylines tricking us into thinking we just saw something that we did not? With films like these it can be a tricky rope to walk. You don't want to pull an "X-Men: The Last Stand" and leave the theater exclaiming that it was the greatest movie you've ever seen, to then have to make that embarrassing phone call to your friends a few days later trying to figure out how you got cheated so badly. It's an awkward moment for everyone that's better if just avoided entirely.

Anyway, I slept on this film, gave my mind some time to process, and I'm now confident I know exactly what it was I was watching.

It was a popcorn blockbuster on an epic scale! Here's the thing: there are things that work in this film, and plenty of things that don't, but overall, it was an enjoyable, albeit overwhelming, visual experience.

What I really enjoyed with this film was, number one, the huge leaps and bounds made my the 3D department from the first film to this one. When I first saw "Clash of the Titans" in theaters, I went for that 3D. It was post-conversion, and I think the film was just cut too fast to make the 3D work in anyway. It was choppy and messy and all over the place. With this film, you could tell how much the technology has advanced in only a couple of years. It wasn't perfect 3D, but it was watchable and fun. They still wanted to use a few tricks with things flying at the screen, but it wasn't too much. And with a film like this anyway, I can accept it. Normally, if you're not a fun horror movie, I don't want any 3D gimmicks. Make me part of your world, and that's it. But it was used well in this film, and I can move past it. 3D aside, the visuals were very magnificent but very in-your-face. Just as with the first, the cuts were quick, and the pace was very fast. It worked for this film though. It was an extreme film on an epic level, and I actually enjoyed the chaos.

For me the acting came off as rather generic, and probably the weakest point and biggest letdown of the entire film. As much as I like Sam Worthington, for some reason it seems like he just doesn't care about these films or something. I've seen him do better work, so I know he's capable of it, but it has not translated to an engaging character in either of these films. Maybe he's getting bad direction or something, but his character never gives me the full emotion I want to get out of it. There are small glimpses throughout where you feel like they're onto something, but then just like that, it's gone. I root for his character; I appreciate his epic task, it just seems like I should feel like there's more at stake with something like this. And I never do. Ralph Fiennes I think gave the best performance of the film. He doesn't get a lot of screen time, but what he does get, he utilizes. His character is dark but also has a heart that ever so slightly creeps out in this film. Also, our new sidekick, Agenor, played by Toby Kebbell, actually did pretty well. But anytime there's a character with a villainous past that overcomes it for the greater good or to realize his destiny, I'm a fan. That being said, that wasn't even the greatest example of that theme in this film. The final battle, featuring Zeus and Hades, is epic in every way. I felt emotion and knew I was finally getting what I wanted from this franchise - characters to step-up and make me feel a sense of pride for them. I won't dive into the specifics too much, but that battle is easily best part of the whole film for me (even though Kronos is a huge letdown, and follows the exact same pattern most villains do in this franchise - don't know how to make it epic, just make it as big as possible).

The content of the film was entertaining and interesting. If your movie is about mythology in any way, I'm going to have interest. I love that history and enjoy almost all interpretations of it. So I appreciate what they're trying to do with this franchise. But that being said, I just think they're missing a little bit of majesty or something. That little spark that makes this series magical and fantastical. This is a film about the Gods, and battle on a more epic scale than any we've ever seen. They should be glorious, and triumphant, and beautiful. They almost get there in all of those categories, but unfortunately do fall just short every time. I think it all looks cool, it just never hit's that 11 on the epic scale that I want it to.

When they're done making these films, I imagine I'll forget about them completely and go about my life without any cares of doing so (that being said, do these films not scream constant TNT reruns? Maybe our kids will grow up loving these movies!). This film made for an entertaining watch in the theater - exactly what I needed from it on a Saturday afternoon - but it won't ever be much more for me. And while the characters and destinations were different, it still followed almost the exact same pattern as the first film. It wasn't anything groundbreaking or revolutionary, but it was a big step up from the first installment, which is something I give it credit for. I think if you get the chance, this is worth a watch in the theater - especially if you went and saw the first one a couple of years back. It's a fun adventure tale, and one that I think all can enjoy if you don't expect to get anything more from it than that. Don't look for anything more than a group of people getting together and trying to jam-pack as much action and effects as they can into a 2-hour film. But if that's what you're looking for, this film succeeds. Otherwise, it might just be another action movie that goes by without much notice. 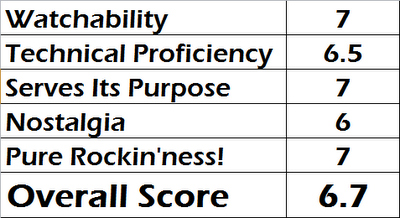