Movie Review: "The Cabin in the Woods" by Ben Foutch 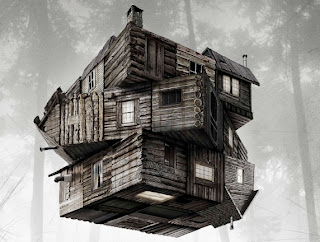 Director: Drew Goddard
Writer(s): Drew Goddard, Joss Whedon
Cast: Chris Hemsworth, Kristen Connolly, Anna Hutchinson, Fran Kranz, Bradley Whitford, Richard Jenkins, Jesse Williams
There is a lot of hype surrounding The Cabin in the Woods. Is it really “the horror film to end all horror films” as Joss Whedon boldly stated? Or does it fall short of expectations? One thing is for sure, you’ve never seen this before. Well, sort of…

If you thought that the trailers for this film revealed too much, then don’t worry. Nothing is really spoiled. A group of young adults go to a cabin in the woods where certain events are being controlled by some secret agency. Want more? You won’t get any more plot details from this guy. However, having seen a handful of horror films will certainly elevate the experience. Rest assured, this is not your standard cabin in the woods scenario.

Joss Whedon and Drew Goddard have given us something unique here. They have taken everything you love and hate about horror films and made something that is both original and entertaining. As stated above, a healthy horror palate will be more beneficial for the movie-goer; almost every genre cliché is presented and satirized. There are numerous references that I won’t spoil in honor of your experience; also I don’t feel like typing multiple pages. That being said, horror knowledge is not required for this film, it’s just highly recommended.

There is a conspiracy/mystery shrouding events that should keep the less horror inclined focused on what’s happening. You might be able to piece most of the mystery together. The filmmakers were fairly generous spreading hints and clues throughout the film. Richard Jenkins and Bradley Whitford play the main conspirators. Not only do they get the best dialogue, but are the most interesting characters in the film. I wish they could have gotten more screen time. This brings up the only problem I had with the film. It left me wanting more. Not because of a lack of content, rather, I just wanted that train to keep on rollin’.

I want to talk more about this film, but that would ruin the fun. Few films have turned on my full geek switch, and this one surely succeeded. While I don’t feel that it is the horror film to end all horror films, it will be hard to watch one and not think of this. It will be interesting to see if this is a game changer. The Cabin in the Woods is smart, funny, suspenseful and drenched in gore. Plus, the climax is worth the price of admission. I haven’t seen anything as intense since the lawnmower scene in Dead Alive.