The Making of 'Transformers the Ride' 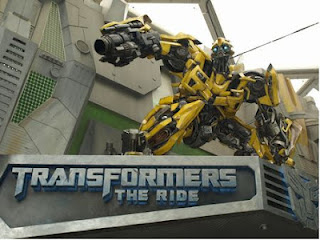 This isn't exactly pertaining to film, but it's pretty close. Attached after the break is a behind-the-scenes video just released by Universal Studios for their newest attraction, Transformers the Ride 3D. The ride is set to open on May 25, 2012, so if you're in Orlando later next month, you just might want to check this out.

The three minute featurette shows some production and development for the ride, as well as a few quick interviews from people in charge of pulling the whole thing together. It does sound like they have a pretty good handle on the whole concept, so check out the video for yourself and see what's in store next month.


I think think this looks like it could be pretty fun (just as long as it's not a roller coaster, I should be fine - terrible motion sickness). I like the direction they're taking it though, and pulling in people from all different areas of the film and Universal to collaborate on a final product is a big plus.

Unfortunately, I've never had the chance to visit Universal Studios. I've been to Disney World twice, so I've been in the area, but I don't know, I guess my parents weren't as interested in movie stuff as I was. Since I live on the complete opposite side of the country now, I'm not sure when I'd ever make it down, but if I were to go, I think this would be a ride I'd want to check out.

What do you guys think?