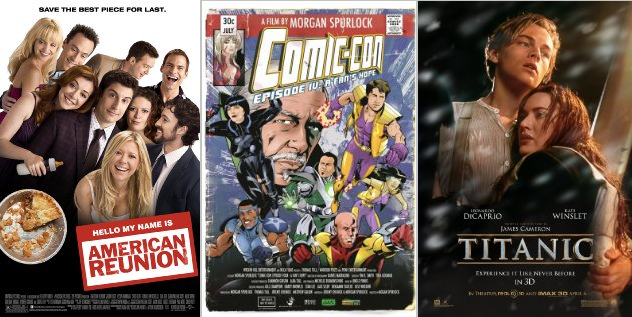 In theaters this weekend, depending on your location, there's actually a pretty nice overall crop of films set to release covering a broad array of subjects.

The conversation starts with this weekend's only new wide-release though, "American Reunion". This is the forth, and presumably final installment of the franchise, which returns pretty much every key player from the original film. I've stated on this site a couple of different times how much I'm looking forward to this film, and that I'll definitely be in attendance this opening weekend. Otherwise, "Titanic" will also open nationwide this weekend in 3D (yesterday actually), but we won't officially call it a new release. It's sure to stir up solid box office numbers though, so it's more than worth mentioning in this post. From there we're left with a handful of independent and limited release films, probably not accessible for those of us demographically-challenged. The titles available however, are "Comic-Con Episode IV: A Fan's Hope", "Damsels in Distress", and "The Hunter".

As I mentioned, the first film necessary of comment is "American Reunion". The films in this series aren't anything spectacular, but they've always managed to entertain. As much as I'd love to say "Can't Hardly Wait" was the party film of my generation, it hit just a year or two early, and the American Pie franchise probably more so links up with my age group. I feel like, generally, I've followed along with this group as my life has reached these next levels just as it has with them. Many weren't big fans of the sequels to this franchise, but I've enjoyed all of them. They're all easy to watch, and provide the perfect tone for the type of film they are. This newest edition has received mixed reviews early on, but for this franchise, that probably won't mean much to you. At this point, you're either a fan or your not. Expect a nice blend of immature and raunchy humor, mixed with a truly sweet and heartfelt core.

Next up is the 3D re-release of "Titanic". At this point, there's no need to discuss the plot or expectations of the movie. We've all seen it. But it's surely to be a big player at the box office this weekend, and warrants attention. I think it will be a really fun watch in 3D, and if you know anything about James Cameron, he's not putting anything out unless it's as good as it can possibly be, technically speaking, of course. I'm confident it will look great though, and will surely entertain. Regardless of whether or not you ever got a chance to see this second-highest all-time grossing film in theaters originally, I don't think I'd pass this one up. If nothing else, it should be a fun experience on an epic scale. And definitely opt for that IMAX or Carmike BIGD showing if you can find it. This is another film I'm sure to check out at some point this weekend.

Outside of those two big players, there are three promising looking films making appearances at various places around the country this weekend: "Comic-Con Episode IV: A Fan's Hope", "Damsels in Distress", and "The Hunter".

The first, A Fan's Hope, is a documentary featuring Seth Rogen, Kevin Smith, Eli Roth, and Stan Lee himself, providing a behind-the-scenes look at the fans who gather each year for Comic-Con, the world's largest comic book convention. It seems nerdy I know, but Comic-Con has actually grown to amazing heights even in the last five years or so. It's quickly become a home for not only comic books, but film and television as well, with studios premiering brand-new material and updates regularly. I've never been to the event, but I think it would be tons of fun. And whether you're into this sort of thing or not, I highly recommend checking this one out. I expect it will shed great light on the culture of the event.

"Damsels in Distress" stars Greta Gerwig, Aubrey Plaza, and Adam Brody. It centers around a group of college girls in a male-dominated environment, trying to rescue their fellow students from depression and low standards of every kind. I'm not sure if this film is exactly for me, but it looks to be well-written and directed, and from the looks of the trailer, it might just be whimsical enough to work.

"The Hunter" puts Willem Dafoe in the lead role as a mercenary sent by a mysterious biotech company on a hunt for the last Tasmanian tiger. I think this film looks fantastic. I love the tone and vibe I'm getting from it. Plus Dafoe generally turns in a solid performance, so take that and throw in a little Sam Neill and you have something pretty nice. Check out the trailer for it here.

Depending on your interests, all three of these films seem worthy of at least keeping tabs on. They all look like unique pieces that should blend well with the box office giants in theaters right now. I would imagine all of these will show up VOD fairly soon, if they haven't made earlier appearances already.

So that's what we're looking at this week. Now the biggest question is, will any of these films compete with "The Hunger Games"? Honestly, I'm really curious to see how this weekend turns out. There's a ton of variety right now, with most films seemingly on similar levels. I imagine "The Hunger Games" ultimately comes out on top, but then where do "American Reunion", "Titanic", "Wrath of the Titans", "Mirror Mirror", and "21 Jump Street" fall? I have no clue.

Which film(s) will you be checking out this weekend?
Weekend Releases