Today is day two for Ebertfest 2012 and the anticipation is still in full force. It’s about an hour and half until the doors open and the line is all the way around the block. This is reminding me of the midnight showing of "The Dark Knight", but with the added scorching effects of sunlight on my geekish, pale skin. Guess I need to get outside more often. The day already started out as a disappointment for me, as I became aware of Patton Oswalt’s cancellation of appearance due to his work on Ben Stiller's new film. I’ll let it slide this time, Patton, but you better be back next year! And since he offered such an elegant apology, I think I can genuinely forgive him. As the line started progressing toward the building, I let my disappointment subside. After all, I was going to spend the day watching movies with people who have the same kind of passion. 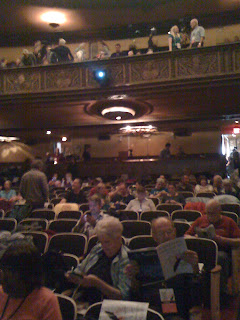 If you have never been to Ebertfest before, make it a priority for next year. This is the cure for the jaded theater goers. Not only do you get to watch films in an aesthetically pleasing, classic theater like the Virginia, but the fellow attendees abide by theater etiquette not normally seen at standard movie screenings. Getting tired of annoying jerks talking on their cell phones, kicking your chair and providing idiotic commentary during the film? Rest assured you won’t have that problem at Ebertfest.

Even though the line was long, I found a pretty decent spot on the floor level. I took a few pictures of my surroundings to pass the time. Chaz took to the stage and informed us that Roger wasn’t feeling well, and would not be on stage today (another disappointment). She went through the usual routine of thanking us for being a part of the festival as well as giving respect to all of the sponsors. It was now time for the first film of the day, "Big Fan".

"Big Fan" was written and directed by Robert Siegel, who you might remember as the writer of the Academy Award nominated film, "The Wrestler". The film follows an obsessed New York Giants fan, happily drifting through a seemingly drab lifestyle. Siegel discussed the film, which was moderated by Christy Lemire. Siegel knew and enjoyed the fact that this was not going to be a blockbuster. He grew up loving “cult” films, and wanted that kind of status for "Big Fan". He said, after seeing the audience at Ebertfest for this film that was released over three years ago, he might have achieved his goal. Although he seemed to enjoy the experience, he did add to the fact that the experience was kind of “nerve-racking”. He noticed certain flaws in the film. Poor lighting, bad acting from extras, etc…

He also revealed some interesting facts about the film. Apparently, Patton didn’t have the most comprehensive knowledge of sports, often referring to touchdowns as “points” or “goals”. Also, Kevin Corrigan was not his first choice for the role of Sal. He originally wanted Artie Lange for the part (probably wouldn’t have been the best choice).

The second film of the day was "Kinyarwanda", directed by Alrick Brown. The film follows different viewpoints during the 1994 Rwandan genocide. The discussion was led by David Bordwell and featured filmakers David Bordwell, Darren Dean, Ishmael Ntihabose, Deatra Harris, and Alrick Brown. Ishmael Ntahose, who is an engineering major, received grant money to make this dream project ($250,000). He had little time to finish the film and brought in Alrick to helm the production. Alrick had two weeks to finish the script and a sixteen day shooting schedule. The film was emotionally powerful. Their intent was to "humanize" the characters, in order to stay away from the "Good vs Evil" trope. Scenes carried more emotional weight through the use of Pulp Fiction-style editing. Even though the narrative wasn't linear, Alrick said that the sound design and love story were the only linear structures within the film.

He also wanted the audience to take a look at their own lives. Forgiveness is a recurring theme within the film. Maybe we should take a "look in the mirror" and see if their is anyone in our lives that should be forgiven. In addition to forgiveness, he wanted us to realize that the Rwandan genocide interrupted these peoples lives. Rwanda should not only be associated with this tragedy. Instead, realize that they are living their lives as we do, albeit with cultural differences. They live their lives happy, with hopes and dreams, just like everyone else. 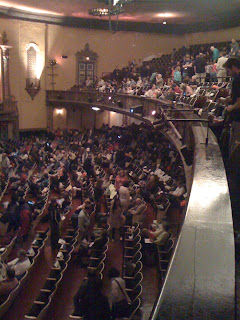 After a short break and some dinner at Peking Garden, I returned to the Virginia and awaited round three. I chose a balcony seat this time for a different view. This was the last film of the night (I'm calling you out here Patton). "Terri", directed by Azazel Jacobs and staring Jacob Wysocki, follows an overweight highschooler who only wears pajamas because they are comfortable. He is on the receiving end of many jokes, but manages to find a few friends along the way. One of whom is the Principal, played by John C. Reilly.

Azazel and Jacob discussed the film, moderated by Christy Lemire. Jacobs acting career had origins from his stand up comedy team (two other members we in attendance). He brought emotional depth and inspired physical quirks to the role that impressed the audience, including myself. He said that he is a very "physical" actor, and giving the character those kind of quirks kept him grounded in the role. You can look forward to seeing him in Mathew Lillard's new film, "Fat Kid Rules the World". Azazel said that aspiring filmakers should know when to choose their battles, as pride can overshadow the collective vision.

It was a long day, but well worth it. The films were great and the discussions were interesting and informative. Look forward to our Day 3 coverage tomorrow, where Derek will covering the first couple films, and I'll check out the late show.
Ben Foutch Ebertfest