Film: "Joe Versus the Volcano"


I head off to see the first screening of Ebertfest, Joe Versus The Volcano (1990). I was successful in finding a great parking spot. I got out of my car and I start walking towards The Virginia Theater. I see a huge line wrapping around three sidewalks surrounding the block of the theater. I chuckle and think, “Good thing have this press pass. Not trying to wait in that.” I walk up to the ticket booth and ask the lady stationed there, “Where can I find the line for those with press passes?” Thinking she would direct me to the VIP line or one of the other shorter lines, she turns to her superior and asks my same question, I then learn I have to stand in the line wrapping three of the exterior walls of The Virginia. “No big deal,” I think to my self, “I’ll be in the assigned press section and find a seat easily.” I head to the end of the line and wait.

Head below to find out what happened next at Ebertfest: Day 1... 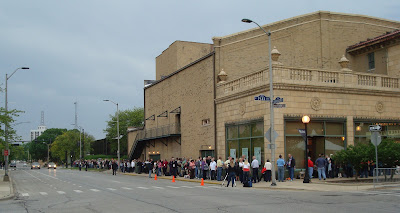 Once the doors open the line starts moving pretty quickly. I was at the front entrance in no time. I walk past the concessions into the majestic auditorium that is The Virginia and gaze upon its beauty. No seriously, the place is beautiful. Walking in is almost a religious experience. I see another guy with a press pass on and say “hey”, with the intention to start a conversation that will lead to finding our assigned press seating. We didn't find any assigned seating, so we just sat down. Turns we sat in the VIP section. We were ushered off and told we could sit literally anywhere else. But the lower lever was pretty full so we made out way up to the balcony. Found a perfect spot, minus the tight legroom, right in the middle.

I have an hour to kill waiting for the movie to start. I get on my phone a bit, skim the program, listen to the organist, and include myself into conversations with those around me. Once the organist finished his lively passionate number, Roger Ebert and his wife Chaz walk out onto the stage to a standing ovation. Ebert gave a wave hello and eventually walked back behind the stage. Chaz begins to read the announcements, looks at the sheet, and looks at the audience and asks, “Who’s been to Ebertfest before?” Many hands go up, to Chaz’s relief. She then quickly decides, “I’m not going to read all this… I’ve never seen all of Joe Versus The Volcano… I want to get to it!” She gives the abridged version of the announcements and walks off stage. 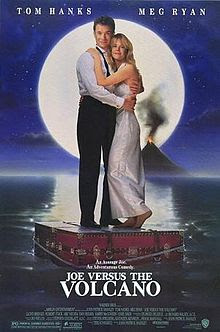 The true religious experience occurred when the lights began to slowly dim as the red velvet curtains began to open, revealing a massive blank widescreen. The digital projection of Joe Versus the Volcano had reached the screen and began to play. It was monumental.

Joe Versus The Volcano is a 1990 Amblin film written and directed by John Patrick Shanley and stars Tom Hanks and Meg Ryan, the first of their famous multiple on screen collaborations.

It’s interesting to note the ties Joe Versus the Volcano has with another movie set to screen for Ebertfest this week, Kind Hearts and Coronets (1949). In Joe Versus The Volcano, Meg Ryan plays three very different characters in the three very different settings of the film. In Kind Hearts and Coronets, Alec Guinness plays eight different characters in the film. This only occurred to me now as I’m typing this. I’m not even sure if Ebertfest has made note of this relationship. If so, I missed it, and I apologize to you, Ebertfest, for me thinking I’m a genius.

(UPDATE: The Kind Hearts and Coronets screening has been canceled. They must have caught wind of my genius?)

Once the film was finished Chaz introduced Festival guest, two-time Oscar Nominee Stephen Goldblatt, Director of Photography for the film, to the stage for a Q&A. He was handed a Golden Thumb Award as he walked to the stage. I’m sure The Golden Thumb easily makes up for those two Oscar losses. Film critics, Pablo Villaco and co-host to Ebert Presents At The Movies, Christy Lemire, moderated the discussion. Goldblatt has served as cinematographer for such films as Lethal Weapon 1 & 2, Young Sherlock Holmes (the first film to have a fully CGI character), Batman Forever, Batman and Robin (one of Nathan Hinds' favorite movies), Prince of Tides, Charlie Wilson’s War, and The Help, among many others.

During the discussion Goldblatt stated that he actually hadn’t seen the film on the big screen in 20 years. He's pleased to hear that the film has achieved such a strong “cult” status.

Goldblatt started in still photography for newspapers around the age of 16 though 19. Once he went to film school her knew right away that he wanted to be a director of photography rather than director because he “thinks in pictures.” Even to this day he has no aspirations of becoming a director stating, “I see what the poor bastards go through.”

He says to date, his favorite film that he has ever worked on was 2011’s The Help. He loved the family like relationships on the set and also what the movie represented through its great subject matter. While The Help is his favorite, he also says there are movies “I regret doing and directors who regret hiring me.” But he didn't go into names on that matter.

Goldblatt states that he is lucky to be in a position now where he can choose the movies he would like to work on by the script alone, regardless of the films budget. He would gladly take smaller films with no budget so long as the script is strong and represents something that he is interested in. 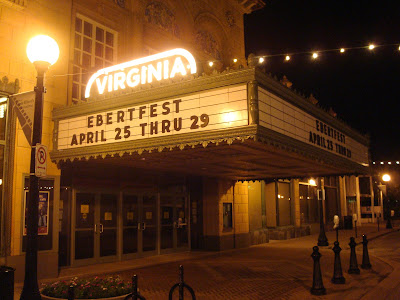 A question from the audience asked how he feels about Peter Jackson and James Cameron’s push to start filming 48 and 60 frames per second film rates. Goldblatt is excited over the idea calling it “3D without the glasses” and “beautiful.” He also explains that through digital processes it is no longer difficult or financially hindering to achieve those frame rates. Goldblatt has not yet filmed in digital, but thinks The Help may be his last movie on film.

Once the Q&A was over I had to rush out and run across the street to make it in time for my other job at a local bar in Champaign. I’m at work for maybe 10 minutes and who walks in? Stephen Goldblatt! I actually got to serve him. It was great! I was also able to get a few exclusive quotes from him, which include “Do you have any pizza with chicken on it?” and “Just set them in the middle” (referring to the flat-bread pizzas I later brought out to his table).

Overall, the first day was a great experience. Ben Foutch will provide you with Day 2 coverage tomorrow.
Derek Clem Ebertfest