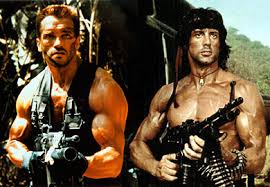 While we never got to see action icons Arnold Schwarzenegger and Sylvester Stallone team up in their prime, the two seem to be trying to make up for it at the end of their careers.

Stallone and Schwarzenegger are already set to hit the big screen together on August 17th in "The Expendables 2". Then they will team up in the 2013 prison thriller "The Tomb". An official release date has yet to be announced.

Ray Breslin (Stallone) is the world's foremost authority on structural security. After analyzing every high security prison and learning a vast array of survival skills so he can design escape-proof prisons, his skills are put to the test. He's framed and incarcerated in a master prison he designed himself. He needs to escape and find the person who put him behind bars.


“D'Onofrio ("Chronicle", "Law & Order: Criminal Intent") will play a deputy director, Jones ("Snatch") a prison guard and Ryan ("Win Win", "The Wire"), Breslin's business partner. There's no word yet on who 50 Cent ("Get Rich or Die Tryin'") will be playing.”

While I could care less about any of the supporting cast in this film, any movie starring Schwarzenegger and Stallone will always jump towards the top of my 'can’t wait to see' list. This movie could suck, and I would still love it based purely on the nostalgia that these two heavyweights bring out. The good thing is that I love prison movies as well; they almost always translate to entertaining films. So couple that with my two favorite childhood actors and I've already got another can’t-miss film to look forward to come 2013.
Casting