Another "The Avengers" Clip, This Time Featuring Tony Stark and Loki 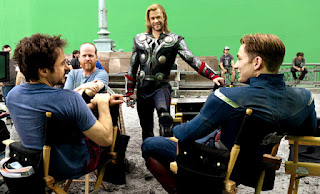 If you haven't seen enough of "The Avengers" yet - and if you're like us, you haven't - then how about one more snippet before the film's official release, which is now less than a month away?

In this video, featured below, it's Tony Stark (Robert Downey, Jr.) talking it up with Loki (Tom Hiddleston). No one else appears in the clip, but it's some good dialogue between the two. What we basically get is Stark warning Loki of what he's doing, while also gracefully introducing him to the rest of the Avengers team.

This is really the first dialogue we get that doesn't show the team completely collapsing on itself. We all knew that would be an early plot point - any time you put that many egos in one room there's sure to be some setbacks. So it's nice to see Stark with confidence in his team; you can feel the compassion he has for them.

Anyway, check it out after the break.

I like the look of this clip. There's good stuff happening here, and it's definitely more interesting to me than what we got from the clip that was released last week featuring Black Widow (Scarlett Johansson). I'm really curious what the premise for the setting in this clip is though. How did Tony Stark and Loki end up in a 70's-style apartment building basically sharing a drink over chit-chat? I know it will have purpose, I'm not questioning that, it just intrigues me.

It's hard to believe that this film is now less than a month away (does that seem like a really early release date to anyone else?). It officially hits theaters May 4, but will first serve the honor of closing out the Tribeca Film Festival a few days earlier (April 28).

Also, if you want EVEN MORE Avengers footage, check out this behind-the-scenes video, courtesy of IMDb, featuring Joss Whedon and members of the cast talking about the big picture aspects of the film, and how they brought it all together. In my opinion, this is actually more interesting stuff than actual clips from the film, but I realize most people care more about seeing what's actually going on in the movie. Regardless of your preference, now you can watch both!

Everyone still on board for this one?