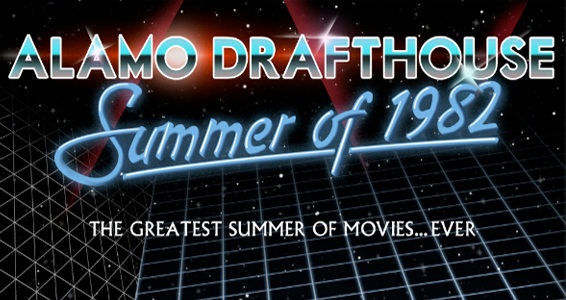 For those of you living in the Texas area (Nathan, hopefully you'll be taking advantage of this), The Alamo Drafthouse will be doing a little something special this summer. As you might be able to gather from the title, the small theater chain plans on rolling out special showings of the best hits from the summer of 1982. And for those of you who are unaware, that was a pretty epic summer; some say the best of all-time.

It looks like each film will get a week in theaters, starting with "Conan the Barbarian" on May 11. Each film will get one full week to itself before the next arrives (so no worries about choosing between two gems if you have a few hours free in the afternoon).

Check after the break for a list of the films screening starting next month.


So here's a rundown of some of the more notable films that will be showing in theaters again this summer: "Conan the Barbarian", "Road Warrior", "Poltergeist", "E.T.: The Extra-Terrestrial", "Rocky III", "Star Trek II: The Wrath of Khan", "The Thing", "Tron", "Friday the 13th, Pt. 3", "Fast Times at Ridgemont High", and "The Dark Crystal". There are a handful of other films that will be showing as well, but these are the highlights. You can check out the full lineup for yourself, as well as ticket pricing (they go on sale tomorrow!) and show date information on the event's homepage.

As I said, most can argue that this was the greatest summer release lineup of all-time, so the fact that the Alamo is reshowing all of these again is fantastic - well, if you live in the Texas area it's great, but if you're nowhere close (like me) it's more painful than anything.

Do you all agree that this was the best summer for movies ever? Which years might be able to compete with it (if any)?