Posted by Unknown on March 31, 2012
Traditionally, the Sword and Sandal genre, also known as Pepla, is Italian in origin, and was developed back in the late 1950's. The goal for the genre was to compete with the bigger-budget Hollywood films at the time. While American critics coined the term Sword and Sandal in a condescending and demeaning manner, Vittorio Cottafavi, one of the pioneers of the genre, embraced it and would further go on to describe it as "Neo-Mythology". While Americans were focused on making their epics of the time, Pepla directors treated the genre much as Superhero films are looked at today. They were light-hearted, easy to digest tales, that were fun for everyone. Eventually, the genre and its name faded away, making way for the next big thing. By the end of the 1960's, the Spaghetti Western was the new "cool" style, and the Sword and Sandal was gone just as quickly as it came. 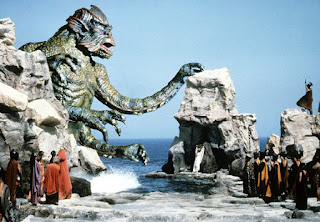 Nowadays, the title for the genre is not meant at all in a condescending way. Nor does it necessarily only include that small subset of films meant to compete with Hollywood at the time. While some still feel the title should only define such late-50's films it once embodied, many consider the genre to be broader than ever, encompassing just about everything of the mythical, biblical, roman and ancient variety. And that's how we see it here. You disagree? Well too bad. This is our blog. We kind of get to do whatever we want...

So that being said, with this weekend's release of "Wrath of the Titans", we now can add one more title to this ever-expanding collection of films to the genre known simply as Sword and Sandal.

Without further ado, our top five favorite, albeit sporadic, films of the genre...


This film is full of cheese, but I love the imagery of it! It comes right from the golden era of the genre, and in my opinion it's the most fun to watch. Plus we've spotted some epic team-up action happening in this film! When Jason decides to go on this epic quest he assembles a team composed of the greatest men in Greece, including Hercules. And the film is worth the watch if for nothing more than the skeleton battle!


A masterful film that does a great job depicting the time period; best modern-day example of the genre in my opinion. Plus it features one of my favorite actors in Russell Crowe. You're not trying to turn this movie on every day, but I think it garners a watch every year or two, which is respectable.


This is one of my all-time favorite movie posters (sans the human faces on the right-hand side, that was a terrible design choice). But the art is beautiful, and I really love the entire style that all of these films kind of embraced for their posters. Oh yeah, the film is sweet too!


Just an epic tale if there ever was one. This film requires an entire afternoon though, so make sure your schedule is clean. If you can find time, it's a great watch. Plus did you know they used over 8,000 extras for this film? Pretty epic!


This is the one film on this list that was a staple of my childhood - it seemed like it was on TNT or USA every weekend. While I haven't seen this film for quite some years now, I can't imagine it would be anything less than enjoyable.


Ben Foutch -
As you can see, Nostalgia dominated the upper portion of this list.


Derek Clem -
You'll find I like a little Sword & Sorcery with my Sword & Sandal.


Conan, like a wise philosopher, really does know what is best in life.


Joaquin Phoenix makes for one great onscreen villain. I can't get enough of the score for this movie, so moving.


My cousin and I use to play this movie all the time growing up! Sadly, he always got to be winged monster that eats you alive and turns your body into goo. I always wanted to play that part.


Judah Ben-Hur is, like, the Forrest Gump of Biblical Times. The man saw it all! Set aside an entire day for this one. It'll take you a while.


Nathan Hinds -
I just did my favorite movies where swords were the primary weapons. The sandals weren't completely necessary.


They are my all time favorite movies. Easy choice.


I saw this movie 57 times in theaters. No, thats not an exaggeration. No, I'm not lying. It's safe to say that I love this movie. In my opinion, its the most badass film of all-time.


People say it's not historically accurate. I say pick up a history book then. The movie is awesome from start to finish.


For me, this movie gave Mel Gibson a pass for anything he does in his personal life. I don't care about celebrities personal lives anyway, but I could never think anything bad about the guy who made "Braveheart".


This movie doesn't have a single flaw. I just haven't seen it as many times as I've seen all of the other movies on this list.


Andy Schopp -
And I thought Julia Roberts movies were the only things eating up my time on sick days! This genre really filled out that other 50%.


So there you have it. Our interpretation of the best/most enjoyable Sword and Sandal movies out there. Obviously there was a lot of variation with these lists, but that didn't stop popular favorites from showing up. The one film that appeared on everyone's list was the Academy Award winning film, "Gladiator". There's no doubt this film is done on an epic scale, and it succeeds in just about every aspect. Coming in right on its heals was "Conan the Barbarian", making the cut on four of the five lists. Pure nostalgia right there. Otherwise, the epic "Ben-Hur" hit on three, while "Clash of the Titans", "300", and "Masters of the Universe" made it on two.

As always, we highly encourage you to check out all of the films that showed up on these lists, as we see them as the best films representing the genre. We hope that these films will help you to expand your knowledge of the Sword and Sandal theme, and provide ample options to further delve into the genre.