Posted by Unknown on March 21, 2012
In this week's edition of the Top 5 Movie Guide, we jump into the lists of one of our favorite complimentary actors of all-time. While Stanley Tucci hasn't had many chances to star in his own films, for years he's been doing an extraordinary job taking supporting roles and really makes them shine through. Some might not even know his name, but when you see his face, you know the quality expected. 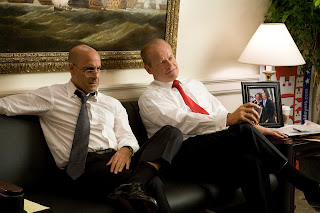 And, with his most recent presence in the upcoming "The Hunger Games", it provided the perfect time to showcase our lists for our favorite roles and movies of Tucci's career. He's been killing it on screen for years and we're happy to get the chance to recognize him and bring some attention to his name.

So without further ado...


Alex Schopp -
So much quality here. I've loved watching Tucci on screen for years now. It's weird compiling a list for a guy that I enjoy so much but has had such minor roles. Plus I really feel like, now that I live in the state, I need to familiarize myself with the movie "Montana", that he starred in in 1998. Anyway, here it goes though...


Not only my guilty pleasure Stanley Tucci film, one of my all-time guilty pleasure movies period! I know most people dislike this movie - the effects are bad, and the script is kind of cheesy - but I love it. And even though it's an '03 release, there's a lot of nostalgia happening here.


As much as it hurts me to put him here because of what an awful character he is in this movie, you can't argue with the quality. I remember seeing an interview with him during the making of it, and he said it made him sick every scene he had to shoot as this character, because he devoted himself to the role so much that he genuinely had to be that guy. With his only Oscar nomination to-date for the role though, the dedication paid off. I watch that movie and I still can't believe that's him.


Pretty solid story with a really great cast. Plus I love the whole one-last-hurrah theme, and this movie is basically that. This cast all plays great off of each other though; Tucci of course steals the show.


Just another solid role. The movie is actually better than you probably think, but for me, he'll always be the main reason to watch this film. Lots of heart and charisma for such a supporting character.


Derek Clem -
Really only one or two of these are because of Tucci's performance. Due to this, the notes in parenthesis are to give clearer insight as to why these movies made my list. I also feel like I must explain why "The Terminal" didn't make my list even though I find it to be a great film and believe Tucci did a superb job. The answer is simply, I didn't like his character. He was mean and unlikable on an emotional level.


For a guy who's spent much of his career playing various types of bad guys including mob thugs, murderers, general jerks, and even a pedophile, It's nice to see Tucci playing a character you just genuinely like. "Easy A" has that character. He plays the hilarious father to the main character. (Likable Character)


Not my first exposure to Tucci but certainly the movie I've watched the most repeatedly with him in it. Major nostalgia points here. (Nostalgia, Most Watched)


This was my first exposure to Tucci (that I remember). I actually remember when my mother bought this VHS. Even though it was a purchase for herself, I figured I'd give it a watch since Peter Venkman was in it. I've loved it ever since. Of all the movies Tucci appears in on my list, I'd have to say this is the "best" movie. While he has little screen time, Tucci provides one of the many quality lines the movie has to offer, "This ain't my dick in your back!" (Quality Movie, Nostalgia)


While he may only recently be considered a household name, if he even is, he has a history of playing vital supporting characters. This movie is an example of that. (I've always loved Pauly Shore movies)


Tucci acts as a neurotic film studio head in this nice little romantic comedy. (Metafilms have always held a special place in my heart)


Nathan Hinds -
I've never seen a film were Tucci had the leading role (has he ever, I don't know?). Regardless, I have always enjoyed his presence in any film I've seen him in. With that being said, most of the films on my list are largely due to other actors in the film.


Only recently have I started to really love this movie. Tom Hanks plays such a likable character, while Tucci's character is just there making Hank's life as difficult as possible. What a jerk!


I swear I'm not making a Tom Hanks list, but this is such a great movie. Me liking this movie has very little to do with Tucci's role, but I wasn't leaving it off the list.


Pure nostalgia right here. I haven't seen this movie since I was a kid. I honestly don't know if I should watch it again; I would hate for it to be ruined.


This is the only film on my list that makes it on here purely because of Tucci's role. I didn't care for this movie as a whole, but Tucci was so good (well, bad) in this movie.


Anyone remember Josh Hartnett? Where did he go? Anyway, I thought this movie was highly entertaining. Another movie that doesn't have anything to do with Tucci, but that's just how I do my lists.


Hillarious dad in a hilarious movie.


What a creep! I must say though, that's an amazing idea for a fort...I just wouldn't use it for what he does...


I think dentists are doctors? Anyway, you get the idea.


So there you have it. Our favorite Stanley Tucci performances/movies of all-time. It's an odd listing of films because, as a few of us mentioned, he's never really the star. His performance always seems star-worthy, he's just never that main reason you're checking out the film. We still love him though, and if you're wanting to familiarize yourself with the actor, there are a lot of films listed above for you to pursue (16 different films in total - more than I actually expected to be represented). Our favorite for the actor, however, appears to be "The Lovely Bones", showing up on four of the five lists. While I can't imagine most of us are trying to watch this movie all the time, and Tucci's character is actually a pretty terrible person, there's no denying how great a performance he turns in for this. Not the most fun to watch, but if you want to see the best from this actor, this is a good place to start. Otherwise, "Easy A" was the second highest vote-getter, making an appearance on three lists. And "Captain America: The First Avenger", "The Core", "Road to Perdition", and "Beethoven" were the only other films making multiple appearances, showing up on two each.

Lots of great films listed above though, and a great sampling for one of the best supporting actors of the generation. We hope you check out all of these films and more as you work to broaden your knowledge of Tucci's filmography.

If there's a particular favorite of yours that we left off, feel free to leave it in the comments below.