Posted by Unknown on March 03, 2012
With this weekend's release of the extreme teen party film, "Project X", we decided to base our latest edition of the Top 5 Movie Guide on movies of the same genre. Now, the films that grace these lists may not all be of the same extreme variety as this newest installment, but nonetheless, they're party movies all the same. 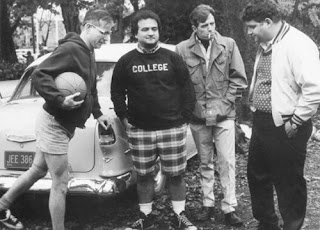 Not much else to say on the topic. Party movies define themselves. Whether it's an entire movie about partying or just one memorable scene featuring a party that makes the entire movie, all of the films listed after the break are our favorite representations of what a great party film stands for.

I love the time period for this film - makes me really wish I grew up back then. I love the relaxed feel to everyone in this movie. People aren't in big hurries with their lives. It's just hangin' out and having a good time. Plus the soundtrack to this movie is spot-on!

90's party comedy staple. Did a really good job of depicting the generation. The overall angst and drama that shows through with this generation compared to others around it is really funny actually. It's spot on, but we had literally nothing to worry about at that time, but everyone still found a way to get worked-up and super cliquey. We really needed to get over ourselves!

While there's a lot of this film that takes place apart from a party, the main party scene is a huge aspect of this movie. It's really where the two main characters grow up. Great movie, and my token submission for all of the John Hughes films of the 80's that revolved around the teen party scene.

While this movie really only came out one year after "Can't Hardly Wait", the difference that year made was huge. American Pie was really the first film to capture the essence of the 2000s teen party demographic. It was a new time; a more extreme and outward time. It's always been about sex, this generation just stopped tip-toeing around it.

What every grown man has dreamed about at one point in their lives - getting back on campus and living out those "glory years" you missed out on the first time around; just trying to get that ultimate college party in one last time. And this film as a whole kind of bridges the gap between all of the generations listed throughout my earlier picks - guys that started back in the 70s and culminating with their return in the 2000s.

"Name's Kurt, but the ladies call me King Snake"

Love it or hate it, this film is a classic.

I can't think of anything about this film that I don't like.

When compiling my list I decided to limit myself to house parties that weren't school related - so no Prom or Homecoming dances. I also decided to steer clear of frat parties, though you wouldn't have found "Animal House" on my list regardless; not a fan.


It's just always been my favorite party movie. It's great seeing everyone from that movie grow up and continue to act. So many before-they-were-stars (if you can call them that) moments.


The two central characters remind me of me and my best pal, even though we didn't do anything they did in high school.


You're gonna want that Tom Hanks in your party movie.


I automatically love any movie that mentions the town I'm from: http://www.youtube.com/watch?v=i37uttMA6Mc

One of my favorite comedies to come out in a long time.

To me this will go down as the defining teen comedy series of our generation. Really excited to see the final chapter.

It's always nice to see a film that doesn't make the 50's look like it was one big Hallmark commercial.

One of my favorite Will Ferrell movies. I think it's a little overrated, but still pretty funny.

This movie as a whole was completely standard. But the party scenes in this movie were some of the crazier and funnier ones I've ever seen.

And there you have it, the best party movies as seen through the eyes of the Slackers Selection writers. A lot of great films showed up on these lists, but the two biggest favorites appear to be "Superbad" and "Can't Hardly Wait", showing up on three of the four lists. Superbad is a little more modern, but it's not a surprise that a film like "Can't Hardly Wait" that really defined our 90s generation was one of the most popular picks. Great staple for that generation. Otherwise, "Dazed and Confused", "American Pie", "Porky's", and "Old School" made multiple appearances, showing up on two of the four lists.

As always though, we encourage you to check out all of the films that made these lists. We hope that they can help you to expand your movie vocabulary and cross off a few hidden gems within the genre. And who knows, maybe this weekend's "Project X" will be making future party movie lists!
Top 5 Movie Guide