Posted by Unknown on March 10, 2012
If you're like most people, then you probably spent a good deal of your childhood watching Walt Disney's movies. Whether it was the animated or live-action variety, there were always plenty of options available. And whether we were learning about friendship and honesty, or just that bad guys always lose, Mr. Disney was there for us.

Now, just as "The Mighty Ducks" and "Homeward Bound: The Incredible Journey" were staples for our generation, "John Carter" is set to release and (possibly) become a staple of this generation's upbringing. 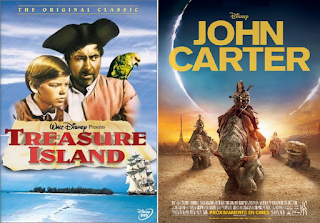 And it is with that that we dive into our latest edition of the Top 5 Movie Guide. As I mentioned, "John Carter" released yesterday, and instead of doing a more generic genre list this weekend, we decided to compile our all-time favorite live-action Walt Disney movies. There were so many to choose from that we ended up with very diverse lists. Hopefully a few will show up that you haven't had the pleasure of watching yet, and maybe even some that you weren't aware were Disney productions to begin with.

Check them all out after the break!


Alex Schopp -
For my list I focused mostly on the movies that helped raise me as a child. Since Disney was so important to all of our youths, that seemed like the best place to start.


That is, other than my number one choice. I was a freshman in high school when this released, so it didn't contribute too much to my upbringing. But, it's in my top 10 of all-time, so I had to include it. Just a great story, with solid performances and a soundtrack that pulls it all together.


The visuals in this movie are so cool. I haven't seen this movie for a long time, but just in my research I was reminded of just how great it was. Not only a staple of my childhood, but themes and humor that I think can be really appreciated as an adult too.


This is just a great American story. Takes place when a lot of people were having real problems with employment and everything else, and this guy gave everyone something to believe in. Powerful stuff, and I still tear-up at the end when he scores the touchdown and points to his friends in the stands.


I struggled for a long while between this and "D2: The Mighty Ducks" but ultimately went with this because of it's slightly more nostalgic nature. I was always trying to watch this. I remember that we never owned this movie, but I wanted it so badly. Any chance I got I was watching it. And that scene at the end when the whole stadium stands and starts flapping their arms. Come on.


One of the better stories about friendship and perseverance. Who would have thought that a movie with talking cats and dogs could be so emotional.


Ben Foutch -
These are all ranked by nostalgia. If it says Walt Disney in the promotional art (posters, covers, etc.) it's considered for my list.

Yes, there is animation; deal with it.

Written by the guys that brought you "Re-Animator".


Derek Clem -
I had no clue where to start with this list. Once I started researching movies I found that many of the Disney movies I love that came out during my childhood are actually co-productions with other studios. That posed a problem in my eyes. I wanted my choices to be Disney movies in the purest sense. I decided to limit my search to Disney movies from one of three decades where I found no evidence of the films being co-produced with other studios: the1960's. Also, I decided to stick to movies that were fully live-action with no animated characters. If I had made a list accepting a mix of the two, my list would have most likely consisted of only films with both live-action and animation.


The remake with Lindsay Lohan is fine, but this is a classic Disney staple. A must watch! "Let's get together, yeah, yeah, yeah."


The first time I saw this movie was in my grade school library, on film, projected on a wall, in first grade. I assume I was the last class to ever view that film reel, as the school was soon supplied with computers, TV's, VCR's and VHS tapes in that same school year.


Ol' 53 is cute, but the real laughs are found in the way hippies are depicted.


Not only is the movie great, you can also visit the Swiss Family Tree House at Disney World!


Nathan Hinds -
Three of my favorite Disney films came out after 2000, but since they are on other lists we've done, I decided to pick my top five Disney films from the 90's, the greatest decade for children's films of all time. With this list I included childhood memories I had that relate to the films.

This movie inspired me and my childhood best friend to treat my wagon as a bobsled and race down our sloped and curved street. It's amazing we never got run over.

This movie actually made me think hockey was the coolest sport ever when it first came out. My love for hockey quickly faded, my love for this movie never has. USA, USA, USA!!!

My second favorite christmas movie to "Home Alone". While I can't remember if I still believed in Santa when this movie came out - I would've been 6 - I do remember that I thought those ELFS (Effective Liberating Flight Squad) were such bad-asses.

While I haven't seen this movie in years, I can tell you that if I ever fell into that kids ridiculous situation, that's exactly how I would've spent that money as a child. Plus the kid got the sweetest deal ever on a castle.

Anyone remember this movie? Very underrated kids movie in my opinion, starring the late, great Patrick Swayze. My grandparents had a pond on their farm, and one time I tried to take a nap in their canoe on the pond with the hopes that I would wake up in Tall Tale land.


Andy Schopp -
This was actually a really tough list to make. I wanted to put about 1,000 things on it but had to choose five. So I went with likeability and watchability and tried to get some stuff in there that I both love and didn't get much play on other lists.


And there you have it. Those are the best live-action Disney productions as seen through our eyes. Will their latest installment, "John Carter", ever compete with these titles? Only time will tell... In the meantime, we suggest that you check out some of our favorite examples listed above. It's clear that 1992-1995 were the golden years for live-action Disney children's films. Though some are repeats, 12 of the 25 films that appear on these lists are from that four-year span; nine different films in total.

Specific years aside, the films that appeared most on these lists were "Honey, I Shrunk the Kids", "Cool Runnings", "Hocus Pocus", and "The Swiss Family Robinson" - all only showing up twice. I think it's safe to say that this is the most eclectic selection we've had on any of our lists thus far. Nothing dominated this week - which doesn't really surprise me since we are dealing with lists of such a nostalgic nature.

Anyway, these are the films that we see most worthy of note today. We highly encourage you to check out all of these films for yourself. And since we all had to make tough cuts in our lists, let us know below which ones you thought deserved a place up here; which ones make your top five?