Posted by Unknown on March 28, 2012
With this weekend's upcoming release of the Snow White adaptation "Mirror Mirror", we thought this the perfect chance to dive into some of our favorite Julia Roberts movies of all-time! 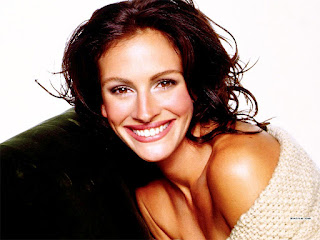 Roberts has been gracing the screens since her breakout role in 1988's "Mystic Pizza". Since then, she's been nominated for three Academy Awards, and won one. She's starred in over 40 feature films, and has become one of the most recognizable and lovable actresses of our generation.

So without further ado, our favorite Julia Roberts films after the break!

I might enjoy this film way more than I should...but I can't help it. It's a good story, and both Roberts and Richard Gere are great in the film and have great chemistry. I love how innocent and naive she is in the environment that Gere's character introduces her to. She's so sweet and you can't help but love her character.

Come on, a film about the exact syndrome that most of our generation suffers from? Then, not only is it made by one of my all-time favorite directors in Steven Spielberg, you're telling me I get that great cast that includes Robin Williams, Dustin Hoffman, Julia Roberts and Bob Hoskins? Sign me up!

Again, another fantastic cast, about a pretty cool subject. Julia Roberts was on fire in the early 90's!

Great thriller featuring not only Roberts in a leading role, but one of my all-time favorites in Mel Gibson. The film is actually very thrilling, and provides for a lot of intense moments. I watched this again recently and was surprised by how well it held up.

Some might think this is a gimme pick just because it's the film she won her Oscar for, but the film is actually pretty solid. I love the supporting cast of Albert Finney and Aaron Eckhart. I'm not tied to the whole working single mom storyline too much, but I do enjoy some good investigative researching!


Ben Foutch -
The first time I saw all of these was either in a theater or from a VCR. Found that interesting.

This is my all-time absolute favorite movie of all-time...all-time. She's lucky to be in it.

Not gonna lie, I bought this soundtrack when it came out. You wouldn't believe how many times I've listened to Rupert Everett sing "I Say A Little Prayer". If I felt guilty about it my excuse would be, hey, I was a kid. I do have to say though, that Rupert singing that song is not only a great display of fraudulent romance, but could very well be one of the greatest scenes to come out of the 90's.

She's just so adorable in this. A fantastic retelling of the Cinderella story.

I remember Julia getting a lot of attention in interviews for improvising the moment when she covers her mouth with a bed sheet to hide her morning breath from John Cusack's character. Supposedly she was actually afraid her breath might smell bad, yet viewers thought it was genius acting because the scene took place in the morning.

Just that childhood staple you watch because your Mom is watching it, and you end up liking it. Obviously nostalgia comes into play here.

So far, of all the lists I've done, this is the only one where the number one movie is miles ahead of everything else on the list. This is pure movie magic.

Great heist movie, with a rock star cast. I love the whole trilogy.

Kiefer Sutherland and Kevin Bacon, I mean come on. I only saw it once when I was a kid, but that was enough to leave a lasting impression.

I'm not gonna lie, I have always thoroughly enjoyed this film. It is in my top five Romantic Comedy films, as well.

Just watched this for the first time a few months ago. I've gotta say, Gere and Roberts are one great pair.


Andy Schopp -
This list is based almost entirely on the watchability factor. Most of the watches for selections 3 - 5 happened on sick days as a youngling or while with my mom. I like "Ocean's 11" a decent amount, I just haven't seen it that many times and hardly ever decide to put it on; it basically just drew the short straw though.


So there we have it. Our favorite Julia Roberts films of all-time. With an actress that's worked on so many great projects in a variety of different genres, it's no surprise for the diversity above. That being said, there are still clear winners though. No surprise that the biggest winner was "Hook". Not only was it the only film to show up on all five lists, it was number one on three of them. "Hook" might be the quintessential example of what this site is about - nostalgia, watchability, technically clean, succeeds in the genre, etc. Otherwise, "Flatliners" and "Pretty Woman" showed up on four of the five lists; "Erin Brockovich" was on three, and "Ocean's 11" and "Conspiracy Theory" as the only other repeats with two selections apiece.

As always, we hope these film selections help you to expand your knowledge of Julia Roberts' filmography, and may our choices help guide you to better watching experiences.

So what do you think? Who had the best list? What Julia Roberts films are your favorite that didn't make an appearance above?
Top 5 Movie Guide