Posted by Unknown on March 14, 2012
With this weeks edition of the Top 5 Movie Guide, and with the upcoming release of "21 Jump Street", we figured what better way to honor the film than with our favorite films by the actor that made the title a hit back in the 80s! 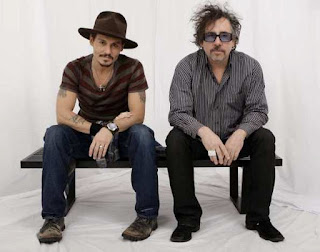 Johnny Depp is probably one of the most recognizable actors in America these days, but some say that without his memorable role in the TV cop-drama "21 Jump Street", his career would have never gotten to where it is today.

And it is with that that we dive into our favorite Johnny Depp movie performances of all time.

Check out our picks after the jump, and as always, feel free to leave your comments below - we'd love to know what your favorite Johnny Depp roles are!

Just an amazingly stylized movie. Classic Tim Burton (before we could spot his stuff a mile away). I love the tone of this movie, and the feel of that "perfect" little town is so creepy.

I love this story. Ed Wood was quite the character, and Depp was the perfect actor to play him. Again, another Tim Burton feature - this pair goes together like lamb and tuna fish (maybe you like spaghetti and meatbol? you more comfortable with that analogy?).

Great performance - got Depp his first Oscar nomination. Just a fun film, and again, Depp was the perfect actor to play this not-quite-there hero. Plus this film helped inspire one of my favorite Lonely Island song ever.

Crazy drug-filled world, that was amazingly inspired by a true story. Very interesting story, much akin to something like "American Gangster", just a little more eccentric.

Sometimes I'm not sure if this movie was too much of an exaggeration of the kind of life Depp was living back then.. Either way, it was a great performance and a film that seems like you can't omit from a 'best-of' Johnny Depp list.

What a way to start your career!

"We don't really move. I mean, we'd like to, but... my mom is sort of attached to the house. Attached is, I guess, not the right word. She's pretty much wedged in."

"The official toxicity limit for humans is between one and one and half grams of cocaine depending on body weight. I was averaging five grams a day, maybe more. I snorted ten grams in ten minutes once. I guess I had a high tolerance."


Derek Clem -
I'm focusing on movies where Depp is provides the main role, hence no Platoon.


Obvious, I know. But at the same time it's hard to deny its place. Depp is only one of the many aspects that makes this film so graceful and full of beauty.


I've always loved the Jack The Ripper stories. Plus, this movie is magnificently Burton-esque without being made by Tim Burton.


We get it Johnny Depp, you're one of the greatest character actors to ever live.


My first exposure to one of the ultimate character-actor greats. (obviously not counting "21 Jump Street" - there he was just a dude.)


Nathan Hinds -
Johnny Depp is easily one of my top three favorite actors of all-time. If he is in a movie, even if it's complete crap overall, chances are I still enjoyed his performance in it. So obviously, it was difficult to trim this list to five, but here it is.....

One of my all time favorites. I will never get tired of watching this movie. It is also his career-defining role, which culminated in a Oscar nomination for best actor as Captain Jack Sparrow. Honorable mention goes to Curse of the Black Pear (are we just running with this?).

Another all-time favorite. This film is so amazing. It's so odd, yet at the same time quite beautiful. It hits so many emotions. For me, this is a perfect film.

Just another one of those all-time favorites popping up on this list. This also is another movie I can watch over and over again. It lacks the violence and grittiness of most films centered around drugs, but still gets the point across of how serious the issue is.

This is a really underrated film in my opinion. There are so many great actors in this film. There is so much going on in the ensemble action movie, but Depp steals the show in this one.

Gosh this movie is depressing. But it's so good. Depp plays the title role of a man who wants more than anything, to just get away from his horrible situation at home, but at the same time feels a responsibility towards his family. You also get to see Leonardo DiCaprio, as Kirk Lazarus would put it, go "full tard".

What an incredible breakout role! Amazing!

Its "magic", technology, fun, weird, and sad all wrapped up and put on film. I bet anyone into movies has already seen this, but if not, go watch it! It's not too late!

I think there are drugs in this movie?

So there you have it. Our favorite Johnny Depp movies/roles of all-time! It's pretty clear what the big favorite is here: "Edward Scissorhands". Tim Burton and Johnny Depp's first of many pairings, and arguably, the best performance of either of their careers. This is such a beautiful and dark movie. I want to assume everyone's seen this, but if by chance you haven't, make it happen. Otherwise, "Pirates of the Caribbean: Curse of the Black Pearl" and "Blow" showed up on four of the five lists; "What's Eating Gilbert Grape" on three, and "Nightmare on Elm Street", "Ed Wood" and "From Hell" with the only other multiple showings, each with two appearances.

As always, we encourage you to check out all of the films listed on these lists! And hopefully, with a little help from our end, you'll be a Johnny Depp expert in no time!