Posted by Unknown on March 07, 2012
As most of you have probably noticed by now, our Wednesday edition of the Top 5 Movie Guide has always been devoted to a relevant actor or actress. Generally, we pick one of our favorites from the upcoming movies releasing the next weekend. Even with the slow winter season so far, it hasn't been too hard. With two or three wide-releases in a week, you generally get a couple of good options. 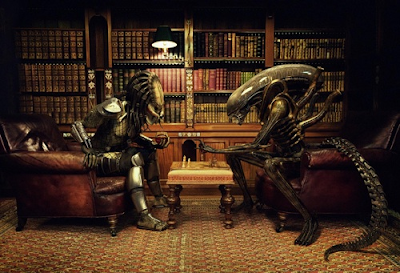 That wasn't the case this week though. And not to say that there aren't any quality actors in films this weekend - "John Carter" is filled with respectable actors. The problem we run into from time to time is finding an actor who gives a broad enough body of work so that when five separate lists are compiled, they don't all look the exact same. That was the challenge we faced this week. And even after some crafty attempts to work in other notable actors, it was finally decided to stray slightly from the script and try something different. Next week, assume that we'll get back to our old ways. For this one though, enjoy our favorite alien characters to appear in film. This isn't necessarily the movie as a whole, just the character.

So without further ado...

Great 80's staple of my childhood. It's completely silly, but I'll never dislike this movie. Plus this movie doesn't get enough love; I don't think enough people have seen it. If you haven't, go do so right now.

I didn't care about Superman at all until I saw this movie (someday Derek, Andy and I should do a brief discussion on how a midnight showing of this film what we watched on a whim changed our lives). Bottom line: he cares more about the human race than we do.

I didn't really care for this movie as a kid actually. It was okay, but nothing that really interested me. As an adult, I can appreciate it so much more. Such a touching story. Plus when E.T. dresses up like a girl - equally the funniest and scariest thing of all time!

How can you not root so hard for this alien? I tried to sum up the relationship happening in this movie, but it's impossible. If you haven't seen it, watch it. It's emotional. Plus the effects are really good.

This isn't really a specific alien, but when compiling this list I was reminded of just how epic that horn sound is that they make. Hearing it in a big theater really made me uneasy. It's so intense. When I hear it I get a sinking feeling in my stomach and imagine how it would be if it were real and I heard that and saw this massive metal ship/creatures. Scary stuff.

Staple of my movie diet as a youngster

Haven't seen it? You need to change that.

For my list i required the Alien to come in contact with Earth and exist as the central character of the film. Being the axiom of the category, I didn't even consider "E.T.: The Extra-Terrestrial" for my list.


Superman sees that the human race has the capacity for good, even when we do not.


Not as nice as Superman. Klaatu gives us an ultimatum, and if he isn't happy with our decision...goodbye Planet Earth.


This was the first DVD I ever owned.


My Dad was really into SNL while I was growing up. He'd tell me and my sister stories about the Conehead skits. Luckily, a Conehead movie came out for us to finally know what he was talking about. I like how this movie is ultimately about a family fulfilling The American Dream. Sort of heartwarming really.


I love the comedic and dated exchanges between Shep and Humans. This was a frequent rental of mine growing up.

For my list, I just did my favorite movie aliens. They didn't have to be the main character, but they had to at least be vital to the central plot. And like Derek said, E.T. is the standard by which all others are set, but I don't like leaving things off a list if its number one so...


I mean come on, has anyone ever watched this movie and not fallen in love with that little guy? With that turtle shaped head and beer belly how can you not?


I never really picture him in terms of being an alien. But he is, and he's my second favorite superhero ever.

This guy made aliens scary to the modern movie-goer. Incredible design.


Did someone say bad-ass? Cause whoever did is the most right ever!


Signature smile and thumbs up!


I love the way he talks throughout this movie. My choice would have been Optimus right here if not for two things: 1) Bumble Bee shows me more heart and 2) Optimus turns out to be a murderer, as we all know.


I used to watch this movie all the time! Plus Jeff Goldblum is rockin' the fur-all-over look!

And there you have it! These are what we see to be the best alien characters to show up in movies of all-time! Pretty varied lists this time around. "Earth Girls Are Easy" made three appearances, which surprised and delighted me. "Superman Returns" and "Predator" also made three appearances. Nothing did more than three though. The only other films to hit on multiple lists were "Transformers", and "E.T.: The Extra-Terrestrial".


We hope that these lists help guide you in your future viewings. There's a lot of great stuff to work with from here. A lot of these are alien staples, but as always, we highly encourage you to search out the lesser-knowns and expand your library for this genre.
Top 5 Movie Guide