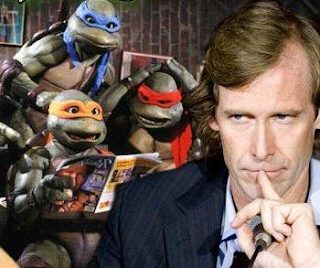 I really wasn't planning on having three posts up here on a movie remake that's still more than a year and a half away, but since the web is abuzz with all of this action, I figured we're doing a disservice by not including it.

As you know, a week or so ago, Paramount officially announced that they'd be rebooting the Teenage Mutant Ninja Turtles franchise. Soon after, a producer and director were selected - Michael Bay and Jonathan Liebesman, respectively. Bay jumped right in with his thoughts for the franchise, including that he's planning on having the turtles be aliens and not mutants as their name suggests. This of course set the web on fire, but honestly it wasn't anything more than Bay's sheer involvement that sent fans furiously running to the message boards. Personally, I'm not one who's incredibly upset with Bay being attached (though I'm not sure how I feel about them being aliens this time around, but I'll wait and see).

So, in what hopes to be the last post on the topic for quite some time, read below on Michael Bay's latest comments, firing back at all of the unruly fans' reactions to his involvement with the project.

Today, Bay released another statement, this time responding to all of the hatred floating around from his first comments. You can see them below, but check out Bay's forum, Shoot for the Edit, where he first posted the comments, and a place where Bay often releases new information.

Fans need to take a breath, and chill. They have not read the script. Our team is working closely with one of the original creators of Ninja Turtles to help expand and give a more complex back story. Relax, we are including everything that made you become fans in the first place. We are just building a richer world.

I like the comments. I like that Bay isn't putting up with the crap (well, as much as he can at least), and is calling out all of the complainers right now. He's right though. Sure he makes some questionable choices in some of his films, but I do truly think that the first "Transformers" film is incredibly solid. He makes movies epic. Period. And we have to remember that he's not even directing this one (though, from what we've seen so far, I think it's pretty clear he'll be front and center, with a large hand in it).

We do need to relax though and not assume too much this far before a release. Though this isn't specifically related, I remember a few years ago when Heath Ledger was first announced for the role of The Joker. I was pissed. I didn't have feelings one way or the other for Ledger back then, but I thought he was a terrible choice for that role. I couldn't understand what Christopher Nolan was thinking. But look how that turned out..
All I'm saying is we worry so much about stuff way before it happens. Let's give Bay a shot at this and see what happens (I mean, we have to regardless). It's going to be epic, and Bay knows the passion for this fan base, so I'm confident he won't completely ruin the franchise. I'm willing to wait and see.

What do you guys think?