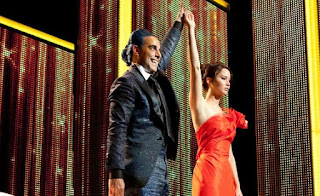 Last night I went and checked out "The Hunger Games". As I've mentioned a couple of different times on this blog now, I was completely unfamiliar with the source material. I saw all of the hype happening for this film, and the reviews and insider chatter seemed positive. The trailers showed a basic idea of what we'd be getting into, but even just through them, I never really understood what it was we were getting ready for.

Last night, all my questions were answered though. And while I will gladly say that this was a solid film, I'm still not entirely sure where all the hype was coming from. Maybe I went into this expecting too much (it is just supposed to be the next tweener franchise, after all), but ultimately, I was interested with the film, just not blown away.

If you've been hiding under a rock for the last couple of months, and you're unfamiliar with this title, "The Hunger Games" is the first installment in a series of young adult novels written by Suzanne Collins. The basic premise is that in the future, the United States has collapsed and what's left is a country called Panem, which is one giant, wealthy city, Capitol, and 12 smaller, poorer surrounding districts. In order to show their dominance (and also their compassion?), each year, two children from each district are selected to participate in the Hunger Games - a fight-to-the-death competition where only one is left standing. The winner is then invited to stay in the Capitol, and be showered in luxuries. The event is also broadcast on television throughout the entire country, and is intently viewed by all (the outlying districts more so in fear and suspense, and the Capitol in humor and entertainment).

Overall, I will say that I loved the concept for this movie. I'm a big fan of most films in this genre, so anytime someone brings something new to the screen, I'm going to have interest. In this movie, the scale was grand, and anything that showcases complete class separation such as this is really intriguing to me. I loved the scope, and the visuals overall were very cool. The Capitol was probably my favorite part of the whole movie. Not only was the actual city design beautiful and elaborate, but the overall styles for the citizens of the city were really neat too. At first I was a little confused as to why everyone looked as over-the-top as they did, but then, after thinking about it (and here, I might need to be filled in a little more on the backstory for this city that the book surely details more), it's really obvious to me why the style looked like they were trying to predict the future from the 70's - if you have a bunch of people with tons of money and nothing else to do with themselves, of course fashion is going to get insane and people are going to get as creative and wild as they can to occupy their time. So that worked for me. It looked neat, and I wish I could have had a whole movie with backstory and characters from this city - or maybe even how this city managed to rise to what it was at the time. As is with most dystopian films, I'm usually more interested in the story that got them to that point, and not as much as what's going on currently. But I digress.

Apart from the style and concept for the film though, I will say that the pacing and tone never quite clicked for me. First off, I didn't much care for the camera work. I'm positive that the reason for the shaky-cam, quick cuts, and close-ups was all meant to show uneasiness and the inability to feel in control. I get it. But it was too much for this film, and I cared more about trying to latch on to some sort of emotion with these characters than trying to follow the crazy through-the-woods shots. And maybe it was because of these combinations of themes - one the uneasiness of human-on-human bloodshed, the other us trying to form bonds with these kids - that made for an incredibly unbalanced pace. The movie just never felt like it got settled in and found a consistent flow or pace, and because of that, I never got fully enveloped with the material.

As for the acting in the film, it's no question that the supporting cast was the highlight for me. They were the glue that held this whole film together. The film was obviously based around these kids, but it was the peripheral scenes featuring actors such as Donald Sutherland, Stanley Tucci, and Woody Harrelson that really made this movie for me. Each turned in solid performances, and provided a lot of depth to the film. And while his performance was probably the smallest of the three, I loved Sutherland's character. I loved the relationship between him and the television show coordinator. While you'd probably label Sutherland, the leader of this country, a villain, I appreciated his strong beliefs on the "game". Every time the television director came to him with a 'let's try this, viewers will love it' idea, he was completely unenthused. He could appreciate how it brought the people of his country together and provided hope to others, but always remembered what the point of the games were; it wasn't for television ratings or staged drama between the participants, it was for the message to the people. You could see his anger in how much that fact was being lost amongst everything else going on. It was just a unique, subtle relationship to watch unfold, with two characters on completely different ends of the matter, doing it for completely separate reasons.

As for the star of the film, Jennifer Lawrence, I honestly felt that her performance came off a little flat. Maybe that was supposed to be the idea - I can imagine you'd probably be a little stunned being suddenly thrown into an arena to fight for your life. And I understand that her character was supposed to be lacking of charisma and much emotion, but I feel that was a thin line to toe that the director wasn't able to pull off. He needed to make her come off that way to the characters in the movie, but still make her lovable and approachable for the viewers. I wanted to root for this girl to win, but I never felt any attachment to do so.

And that's actually one of my biggest let-downs with this film. Where was the emotion? I barely felt any! For a subject that seems like it should have been full of it, I got to the final scenes without a care for who won or lost. Of course I wanted Lawrence's character to make it back to her sister, but it wasn't a necessity for me. I understand that it's a cold subject, a dark sport, and a completely inhuman concept, but I still needed to feel something for these characters. If I had, I think it could have easily pushed aside some of my other complaints and turned this into a very nice film. Again, if you've read the book, maybe there's more there that I didn't have the privilege of knowing, and that material could have filled in some of the gaps for me. But as I've stated before, I'm not here for the books, I'm here for the movies. If they can't stand up on their own, that's their problem, not mine.

Anyway, bottom line: the movie is interesting. The production values are all very high, and the scale of the entire project is wonderful. For anyone that wants to compare this franchise to the culminating Twilight series, trust me folks, it's not that. It's much better on every facet than what those films did. But at the end of the day, it is still a film based on young adult novels, and those are still the audiences that this film is targeting. I could appreciate this film, and will surely go see the subsequent installments, but by no means was I blown away or overwhelmed with the material. And if you want to point to the fact that I've never read any of the books, I can accept that.

The film explores really interesting subjects though, and I still feel confident in saying that this film was an overall success. It just didn't inspire me or give me any strong feelings in its aftermath.


I'm recommending you to check this out, but I think if you're familiar with the books and the original material you might be able to get a little more out of this than I did.
Alex Schopp Movie Review