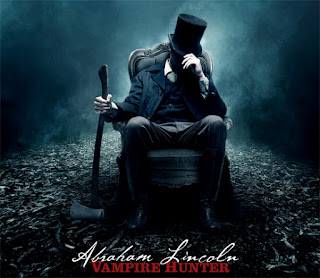 There was a teaser released for this film a little while back that gave us an idea of the tone and scope this movie would have. I enjoyed the trailer. It wasn't anything that pumped me up, but it looked interesting and cool.

Now, a full-length trailer has landed and it fills us in on a lot more of the peripherals. I like that we get some voice-over narration by Abe Lincoln himself, Benjamin Walker, and there's also a lot more action this time around that shows off a lot of director Timur Bekmambetov's style.

Check out the trailer for yourself after the break, courtesy of IGN, and see how this one compares for you to the first teaser.


For me, I'm still not sure this trailer excites me a ton. I love the concept, and I want to like it a lot. I'm just not sure it's going to be the exact tone I'm looking for with this subject.

All of the action looks cool in the trailer though, and I'm confident the production value will be high. I also really enjoyed Bekmambetov's last big feature, "Wanted", so who knows.

Ultimately, the biggest questions I think I still have for this are whether or not Lincoln is going to have "powers". First off, I want to state that I really hope he doesn't - I want this to basically be like a lost chapter from a History book (assuming vampires were real of course...). Part of me thinks that they're wanting to stick to that idea, but then we get scenes of him destroying a huge tree with one swing of an axe. Is that a dream-sequence? Something else? Or just a super-strength that he gets/has? I need to know.

Anyway. If you're not familiar with it, "Abraham Lincoln: Vampire Hunter" stars Walker in the title role, along with Mary Elizabeth Winstead, Anthony Mackie, Rufus Sewell, and Dominic Cooper. It's set to release June 22, 2012.

What do you guys think of this trailer?
Movie Trailer