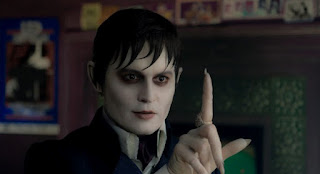 There's been a lot of hype and interest for Tim Burton's latest venture, "Dark Shadows". His film adapts the gothic soap opera television show of the same title that aired in the late 60's. We've seen countless photos for the film already, and with the film now only a couple of months away, it's about time we get a trailer.

Check it out below and see if this soap opera adaptation offers up anything interesting or worthwhile..


Are we just going to say it? I am - I think this looks fantastic! Johnny Depp looks and comes off much better than I expected he would from the photos. I really hope the tone of this film has the same tone and feel as the trailer. It looks campy, and stylized, and fun. I love the cast, and the time period, and the music even makes Depp's "serious" vampire character come off in such a silly way. As of right now, I can't wait for this film! This looks like it has potential to be one of my favorite Depp-Burton team-ups of all-time.


What do you guys think of it? Are you as excited and interested for it as I am?
Movie Trailer