"The Cabin in the Woods" Teaser Trailer 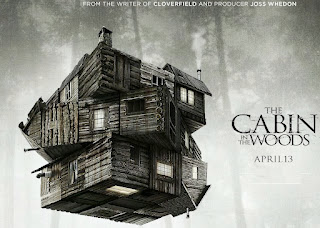 One of the more interesting and anticipated horror/thriller films of the year is set to debut later this week at the SXSW Film Festival. It is, of course, the Drew Goddard and Joss Whedon film, "The Cabin in the Woods".


Very little has been released on this film so far. We know it takes place in a cabin...and in the woods.. It involves five friends who venture out to a remote cabin for an escape, but end up with much more than they were looking for. The rest of the film is a race to figure out what's going on and, more importantly, to stay alive.

Since the film is set to release nation-wide in April, I'm glad that this is the type of trailer being released. We're so close now, we might as well keep the surprises intact as much as possible. This trailer gives a great idea of the concept and depth, without giving any (presumably) major details away.


I was hesitant to watch this short trailer at first because I'd heard there were supposed to be some cool, unexpected twists throughout, and I didn't want my experience to be tarnished. But, I couldn't help it, and I gave in and watched it. And I have to say, while I can see much more clearly what we're dealing with now, I'm still not completely sure what's going on.


If you're a purist and don't want to ruin anything before the big day, I'd pass on this. But if you're not too worried about it - or if you weren't even familiar with the film in the first place - I'd give this one a watch. It looks great visually, and should add something fresh to the overly-stale genre.


I know at least a few of us at this blog have been looking forward to this one for quite some time. Joss Whedon has been a successful writer and producer for quite some time now, with such successful projects like "Buffy the Vampire Slayer" and "Firefly" under his belt. Hopefully this won't be any different.


It should be a really nice addition to the slower spring months ahead.
Movie Trailer