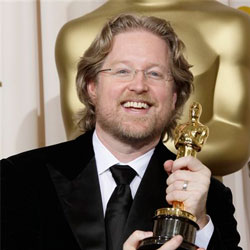 As most of you know, Disney's "John Carter" is set to release this weekend. We had some pretty back and forth discussions about the movie on our latest edition of the Slackers Selection CinemaCast (which you can listen to in the post below), and still we're unsure whether this thing is going to be any good or not.

The director of this film, Andrew Stanton, recently did a talk at TED (Technology, Entertainment and Design) and gave some of his thoughts on how to put a great story together.

If you're unfamiliar with Stanton, you might just think, 'he's doing a cheesy-looking action movie, what does he know?'. But you'd be wrong. Stanton has long been a fixture at Disney, writing and/or directing such films as "Wall-E", "Toy Story", "Finding Nemo" and "Monsters, Inc.", among others. He has two Oscars to his name. He knows how to put a story together.

Anyway, after the jump, check out the video of his presentation at this year's TED conference. For me, this was a great video. I love listening to filmmakers talk about their thoughts and processes. For anyone who has interest in film, this is definitely an enjoyable watch.

And for those who aren't big fans of the easy-to-digest medium of video, there's also some of the more notable excerpts on TED's Blog Page. That will also give you a chance to meander around TED's site and see exactly what they're all about - some pretty cool stuff if you're not already familiar with them.


Now let's just hope that all of this knowledge and insight that worked so well with his PIXAR movies can translate to a big-budget sci-fi picture..