Welcome to this week's edition of The Weekend Box Office. Things heated up a little bit this week as theater totals showed signs of life. Over the past couple weeks there have been some decent releases actually, but no real great box office numbers to match. This week saw the wide-release of four new films and all managed to put up pretty good opening numbers, with the "The Vow" and "Safe House" really finding a way to pack them in. They easily led the field but the other new films this weekend, "Journey 2: The Mysterious Island" and "Star Wars: Episode 1 - The Phantom Menace" in 3D, also made respectable debuts (does Star Wars still count as a debut?). Check out all the numbers after the break.

"The Vow" killed it, leading the way with over $41MM. This was a strong take, but understandable for a romance movie the weekend before Valentine's Day. "Safe House" came in just barely behind it with just over $39MM. And even though this movie is filled with A-List stars, it still put up more in its opening weekend than I expected it to. It still has a way to go to reach its projected budget though ($85MM), so we'll see what this one looks like next week. Neither put together overly positive reviews by critics, so who knows if either will hold up over the next couple of weeks. "The Vow" has a decent shot at at least one more good weekend I think if for nothing else than that it's still right around V-Day.

The two other new films this week put up numbers right around where I expected, both maybe even coming in a little higher. I'm glad that Star Wars was able to put together a $20MM+ weekend, and I expect it should be able to hold decent numbers for the next few weeks or more. Journey 2 really surprised me though. I did not expect it to beat out Star Wars this weekend. I imagine it will drop off terribly over the next few weeks, but for its first weekend, I wouldn't think the studio could be too upset with its take.

Otherwise, rounding out the top five, "Chronicle" held decent ground (still with a 44% drop-off though), taking in $12.3MM. "The Woman in Black" also dropped off by 50%, but still managed the only other double-digit take, bringing in $10.3MM. Everything else from the past couple of weeks has dropped off as expected, pulling in a few million each and rounding out the top 10.

As always, check out the exact (projected) numbers below, again thanks to Box Office Mojo. 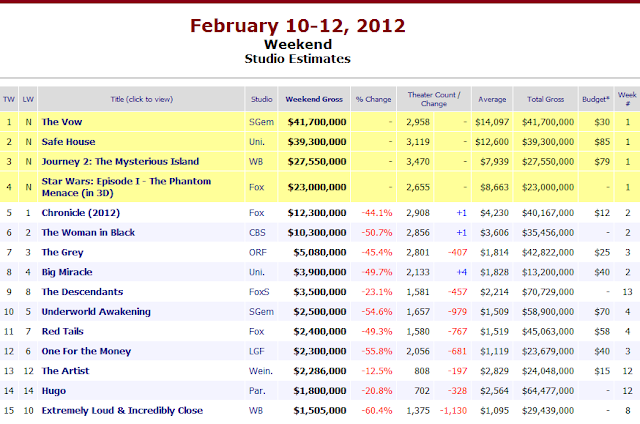