Going into this weekend, I wasn't sure what was going to take the top spot. Of the new releases, "Ghost Rider: Spirit of Vengeance" and "This Means War" seemed to be the two films that would duke it out. I wasn't overly enthusiastic about either choice, but one of them was going to win, right? Wrong. Not only did neither of these take the top spot, neither of them grabbed second either! Two releases from last weekend, "Safe House" and "The Vow" beat both of them out.

See what all the projected takes were as well as where everyone else landed in the top 10 after the break.

NOTE: These are the Friday though Sunday projections, not taking into account what will happen today on Presidents Day, ultimately adding to the long weekend totals.


As I stated above, the two big winners this weekend were the big winners from last weekend. "Safe House" and "The Vow" took in $24MM and $23.6MM, respectively this weekend. A new release, Ghost Rider, came in third with a respectable showing of $22MM. So we do have a full Presidents Day to add to all these totals, and all three are so closely tied together that a little extra nudge for any film can put it over the top. It's really anyone's game.

Outside of the tight top three though, there were still some big players. The biggest surprise for me over the weekend was the number four finisher. "Journey 2: The Mysterious Island" put up much bigger than expected numbers, garnering a projected $20MM. I didn't think this one would have that kind of legs. Yes it's a family-friendly movie, so there's a big potential audience for it. I just didn't expect it could do $20MM+ two weekends in a row.

Rounding out the top five was the other newcomer this weekend, "This Means War". It took in just over $17MM and easily held off the rest of the field.

Those were the biggest players for the weekend. Everything else had pretty big drops and  probably won't be around for much longer (though Star Wars only needs $5MM more to pass "The Dark Knight" and move into the top 10 all-time in world-wide grossing.

Check out the full top 15 below, thanks to Box Office Mojo: 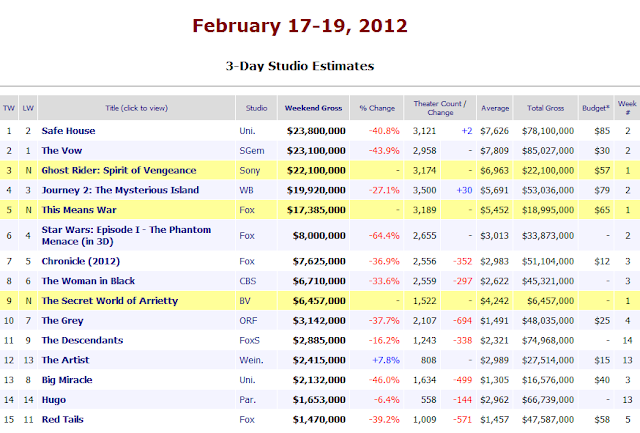