Posted by Unknown on February 01, 2012
Ladies and Gentlemen, welcome to The Slackers Selections' own Top 5 Movie Guide! Your ultimate destination for everything movie lists!This is one of the weekly posts we'll be doing here on the Slackers Selection Movie Blog, with a new posting every Wednesday. Each week we'll select a topic and each of us will compose our Top 5 films in that category. Usually, we'll probably go with a genre thing, like Vampire Movies or Sci-Fi: Earth movies, but we'll also do some that are based around specific actors and directors. 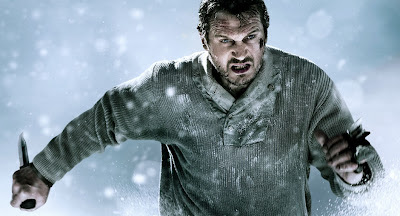 This week, since "The Grey" was just released this past weekend, we decided to compose our Top 5 Liam Neeson movies (all lists excluding this newest title as it needs proper time to marinate). After the break, see which movies made each of our lists and why they landed where they did. Also, as always, you're encouraged to leave your own thoughts in the Comments section below. Let us know where we missed and which of us got it right.And I do want to stress again. Don't expect to find "Best Of" lists in this segment. Any critic can rattle off the best reviewed movies of a certain criteria. These are our favorites - and more specifically, our favorite Liam Neeson portrayals.

So without further ado:

In my opinion, Neeson plays one of the best Jedi to ever take the screen in the Star Wars franchise in Qui-Gon Jinn. Overall, this movie might not even make the top 10 if I were ranking the *best* Liam Neeson movies of all-time, but we're picking our favorites here, and he is the best part about this movie. My list is based on his role in these movies, not the movies as a whole. If I'm thinking of Liam Neeson roles, this one gets me most interested to watch.

We all know why "Taken" is such an awesome movie. Neeson plays a bad-ass father who stops it nothing to get his daughter back. Great action. Good, gripping story.

This is the role that got Neeson an Oscar nomination. Not the most entertaining film to watch, but it must have taken a lot to bring a character like this to the screen. A very powerful role, and Neeson pulls it off exceptionally well.

I imagine this movie isn't usually making many people's 'best-of' Liam Neeson lists, but I think it needs some recognition. It's totally unlike anything else I've seen of Neeson. It's a cool story, and Sam Raimi, director of the film, does a good job of executing, I believe. Some slight cheese, but that's the style and the time. I don't think this movie probably ever got its dues, so if you haven't seen it, go check it out.

Over the past few years I've really been able to get into the modern western. I'm still not much of a fan of the older John Wayne stuff, but western tales told through today's storytellers really interest me. Now, this is no "Tombstone" or "3:10 to Yuma", but I love the setting and fashions of it. The whole time period really interests me. Liam Neeson and Pierce Brosnan in a western? Sign me up.

He plays the Jedi who, at his prime, was the greatest wielder of a light saber ever. He invented force ghost! Qui-Gon Jinn fighting Darth Maul and the Episode I score pair together better than red meat and red wine. plus he looks epic with long hair.

He is great in what i consider to be the greatest ensemble romantic comedy ever.

Neeson plays a character subtly torn between his spirituality and fervent quest for research on sexuality. Personally, I would say this is his best performance. However, it sits at 3 due to the pure awesomeness of Qui-Gon Jinn in the Star Wars universe and my affinity for Love Actually as a favorite film over Kinsey.

I would say this is Neeson's second best performance. I realize Schindler's List is a "better" movie than the three above it. I just enjoy watching Star Wars and Love Actually more than this movie.

"I don't know who you are. I don't know what you want. If you are looking for ransom, I can tell you I don't have money. But what I do have are a very particular set of skills; skills I have acquired over a very long career. Skills that make me a nightmare for people like you. If you let my daughter go now, that'll be the end of it. I will not look for you, I will not pursue you. But if you don't, I will look for you, I will find you, and I will kill you." nuff said.

Christopher Nolan's vision of the Caped Crusader has become one of my all-time favorite film series. For me it is the end all-be all for superhero movies. And this is the film that started it all with Liam Neeson playing the dual role of trainer and villain perfectly.

This film is my all time favorite romantic comedy, jam-packed with some of Britain's finest actors. There aren't too many rom-com's that I can pop in anytime and love watching, but that is never a problem with this movie. It tugs on all the right strings. I laugh, I cry, and I love every minute of it.

For me, one of the ultimate movies chock-full of watchability. Liam Neeson in one of the most bad-ass roles I've ever seen. Can someone say Father of the Year award?

In terms of what is the best overall film in terms of technicality and story, this is by far the best. This film is still probably the saddest film I have ever seen, but equally touching and powerful as well.

Just a good fun movie. Nothing to take too seriously, but just one of those movies I can pop in about anytime and have a good time. Plus a good all-around supporting cast as well.

Qui-Gon Jinn is one of my all-time favorite Jedi. He is smooth, smart and is the founder of the salvation of the Jedi!

Top 5 romantic comedies, easy. His part is one of my favorites.

Neeson does such a great job in this! Handles the role perfectly!

You just can't not love this movie.


So there you have it. The top 5 Liam Neeson appearances through the eyes of the writers of Slackers Selection Movie Blog. "Taken" appears to be the big winner here, showing up on all five lists. Otherwise, a good showing by "Star Wars: Episode 1", hitting four of five, and "Love Actually", "Darkman" and "Schindler's List", hitting on three. But we encourage you to check out all of the above mentioned.

What roles do you think are in the top 5 of Neeson's career?
Top 5 Movie Guide