Posted by Unknown on February 25, 2012
In this weekend's edition of the Top 5 Movie Guide we dive into our favorite Post-Vietnam War Films. With "Act of Valor" releasing this weekend (which by the way, we aren't overly excited about over here) we thought we'd compose a list that featured the more recent wars/conflicts. At first we didn't plan on narrowing it down this much, but since there's so much content on this subject (and since "Act of Valor" is current) we decided to tighten up our criteria a little.


And for the record, we were fairly loose with our interpretation of war - many of the films featured on our lists probably aren't representations of official "wars", more of "conflicts" or "military involvements". But, you get the idea. 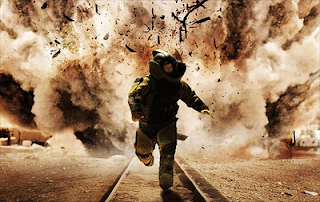 Check all the films out for yourselves below!

Great movie and great cast. I loved the tone of this film, and really enjoyed the satiric nature that this film follows - something very dissimilar to most war films we're used to.

Loved the cast in this one as well. This film was a good look into some real-world events than many of us were not aware of before. Seeing what happens behind the scenes for us to get diamond jewelry that we love so much over here - it's sickening almost. It amazes you how different things really are in different areas of the world.

I didn't want to put this one on my list because it also hit on my Nick Cage list as well. But, I enjoy the film. And much like "Blood Diamond", it shows an aspect of the world very unfamiliar to the common American. Very intriguing stuff.

Don Cheadle is amazing in this. His performance as the unexpected hero of the film is truly inspiring. It's also so hard to see what's going on in this film and watch as no one else in the world offers to step in and help. Great examples both for and against common decency for your fellow man. Great content, tough to watch though.

I remember seeing this movie in theaters when it came out. I will say that I haven't seen this film for many years now, but last time I watched it I remember noticing just how violent and real it felt. The graphic action mixed with the great direction by Ridley Scott made this one of the more powerful war movies centered around combat than most I can recall.

Honorable Mention: None this week. This category is too new to feature anything too off-the-wall yet.

(Preface: I decided to choose films based on wars, battles, conflicts, or whatever you want to call them, that began during my own lifetime)


Amazing Cinematography. Plus, I love how everyone is in this movie. You get a few before they were famous, Orlando Bloom, Eric Bana and Tom Hardy and a couple rounding out the end of their fame. I'm still rooting for ya Josh Hartnett and Tom Sizemore.


I'd put this in my top 5 most affecting films list. The movie totally ruined my day. As Ron Weasley would say, I felt "like I'd never be cheerful again."


Don Cheadle plays the definition of Bilbo Baggins' famous statement, "I feel... thin. Sort of stretched, like... butter scraped over too much bread." I've never seen a man have to do his best to keep control over so many things in such high pressure situations.


Those "in the body" bullet-wound scenes are amazing. You can view them here: http://www.youtube.com/watch?v=oZdSvnXqDvM


A documentary following a US Platoon during the Afghanistan War. We never get to see what they're shooting at. My morbid curiosity always wanted to see. I think never being given the opportunity gives the viewers the understanding of how the events in the film are esoteric and poignant to those who experienced it. Powerful stuff.


This is the film that really pushed DiCaprio towards the very top of my favorite actor list, and he should have won the Oscar for Best Actor. This movie really made me angry, but then again, its supposed to. Great supporting cast as well, and that action was fantastic.


This movie gave me the urge to duck as I was watching it for the first time - some of the best battle scenes of all time.


When I finally broke down and saw this, it had such a strong personal grudge going against it. I'm still not over it beating "Avatar" for Best Picture, and I still don't think it deserved it, but as I was watching it I found myself thinking "crap, this is a really great movie". Still holding that grudge though...


I wanted to put this on my Nick Cage Top 5 List, but I'll gladly squeeze it in here instead. He sure did a good job of making a complete scumbag look really cool. I knew Cage's character was a bad guy, and I was rooting for him the whole time. This movie also had one of my all-time favorite movie posters.


Almost every war movie takes you to the battlefield. This movie took you into the homes of the families who have lost soldiers in combat, and showed us the soldiers who have the job of informing family members about the loss of their loved ones. Anchored by two amazing performances by Woody Harrelson and Ben Foster, this may not be the most entertaining of war films, but in my opinion, it is one of the most important.

1. The Men Who Stare at Goats

This has so many awesome elements and people in it. Jedi! Jeff Bridges! This movie is a gem and one of Clooney's all-time best comedy roles.

The pair-up in this is great. Great story and great heart. Plus it really ties itself up nicely.

I feel like this movie is so popularly referenced in today's culture that it's impossible to avoid calling it nostalgic.

Great action and a decent throw-back to over-the-top war. I love the first two Rambo movies and this reminds me of those in a lot of ways.

So there you have it! That's our take on the best (modern-era) War Films out there! Not a lot of variety in these lists, but definitely some stuff to work with. The big winner tonight was "Black Hawk Down", hitting on all four of our lists. "Blood Diamond" and "The Hurt Locker" showed up on three, and "Three Kings", "Lord of War", and "Hotel Rwanda" all had multiple showings, appearing on two of the four sets.

A lot of these are modern staples, but there were a few unique choices in there. Hopefully some of those you haven't seen yet and can help you expand your movie universe!
Top 5 Movie Guide