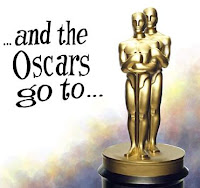 My favorite Best Picture winner of all-time is a tie between two of my favorite movies ever! I couldn't choose just one, so I'm just going to touch on BOTH for you! It's like ordering one cheeseburger off of the dollar menu and then realizing they made a mistake and threw an extra one in the bag! Although, I hope you don't relate my reviews to a dollar menu food product...oh well.


First off, I will obviously talk about "STAR WARS"! The movie that began it all! And after that, we'll delve into "AVATAR" a little.

So as I said before, "Star Wars", the movie that started it all, is full of so much mythology and such a great great cast that it's hard to even know where too......hold on. The Academy is on the phone...I'll be back in just a second.


So...apparently neither of those films won Best Picture. I'm confused. This makes no sense to me. Apparently films called "Annie Hall" and "The Hurt Locker" won those two years? Well...I've never heard of those, so I doubt anyone else has either. I guess I have to come up with something I can actually use for this review then.

Seeing as it's the only Best Picture winner on my Top 10 Films of All-Time, I'd say "Forrest Gump" takes the cake as my personal favorite Best Picture winner. It's funny and sad and a mixutre of everything in between. I love the fact that this movie takes us through a portion of history with this character front and center! History has always been my favorite subject to study both on my own and back in school, so this movie really hits home for me. I would also like to say that Tom Hanks does an amazing job winning over hearts and laughs as the slightly challenged Forrest Gump. And everyone involved in this movie helps make it work.

I guess instead of giving an full on review I'll just say this: If you haven't seen it, go see it. If you have, then you already know everything about the movie, and I know you are already in love with it. But go watch it again anyway.

P.S. This is not a review about how the above-listed movies should not have won. I have seen them and can see why people decided they were the best and I applaude them and everyone who worked on them for doing such a fantastic job!
Andy Schopp Movie Review Throw-Back Review