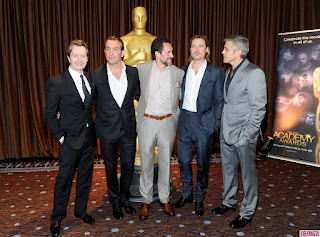 Well the 84th Academy Awards have come to an end. If you read my previous post then you know all of the insecurities I had with some of these categories. As it turns out, I was probably over-thinking most of them. Definitely some surprises that no one (that I heard of) saw coming, but all just part of what made this a great night.


The show, in general, was a pretty good one. I enjoyed Billy Crystal as the host again - though it did feel like he missed on a few of his jokes; the timing or maybe even just content wasn't quite right on some of them. But he is an enjoyable guy, and really a face that just feels like the Academy Awards. One of my favorite parts of the evening was the Cirque du Soleil performance. Going into it I thought it was going to be overkill and that they didn't need to waste time putting on pointless performances. But I have to say, with the help of Danny Elfman's music as the driving force and theme behind the entire performance - which by the way really showed through - it actually made for an enjoyable segment.


The rest of the show went pretty much as expected though. They only went a couple of minutes over their scheduled time, which is good. It was a tidy three hours. And all of the actors and presenters were great too. Everyone really looked to be having a good time.


Anyway. While we'll be discussing the awards in full on this week's episode of the Slackers Selection CinemaCast, check after the break for a full listing of all of the winners, as well as some of my quick thoughts on a lot of those categories I was so unsure about going into the night.


In all five of the tech categories that I discussed previously (omitting Film Editing because that one actually went to "The Girl With the Dragon Tattoo") - Art Direction, Cinematography, Sound Editing, Sound Mixing, and Visual Effects - it was indeed "Hugo" that swept the field. "War Horse" didn't win either of the sound categories, "The Artist" didn't take Art Direction or Cinematography, and "Rise of the Planet of the Apes" didn't win for Visual Effects. I mentioned it as a possibility that "Hugo" could sweep the field, but I truly thought there'd be some variety throughout. I knew the Academy loved the movie, I guess I just didn't realize quite how much. "Hugo" was a wonderful piece of film-making though, and I'm glad to see it win. I just expected they'd share the love with some of the other films.


Arguably the biggest upset of the night went to Meryl Streep for her win in the Best Actress category over the presumed front-runner Viola Davis. Other than at the BAFTA's (which most of us chalked-up to their preference for a British-themed film), Davis cleaned up. She took home every other notable Best Actress award, and did everything perfectly. Her speeches were all genuine and heartfelt, and there seemed to be a lot of sentiment for a hard-working actor finally getting her dues. But again, we underestimated the Academy. They love Meryl Streep. She's been nominated a million times (only 17 actually), and I guess they thought she needed a win tonight. I'm not upset or bothered in the slightest by the win (heck, she didn't even freak out this time, so that's already a plus!), it was just surprising. We'll hit on this more in our CinemaCast, but it was definitely note-worthy.


Outside of those categories though, most all other awards went out as expected. "The Artist" and "Hugo" both tied for the most award wins taking in five each.


The big "losers" tonight were "Moneyball" and "The Tree of Life" - two films that were beautifully made that most thought would find some love somewhere in the field. But alas, they did not (and for the record, I was 16 of 24 in my predictions - I completely bombed thinking that the tech categories would all be divvied up between three of four films).


Here's a list of all of the nominees and winners, information via the Academy's main site:

Music (Original Song)"Man or Muppet" from "The Muppets" - Music and Lyric by Bret McKenzie -- Winner "Real in Rio" from "Rio" - Music by Sergio Mendes and Carlinhos Brown, Lyric by Siedah Garrett