Star Wars: Episode 1 in 3D, and Its Various Advertisements 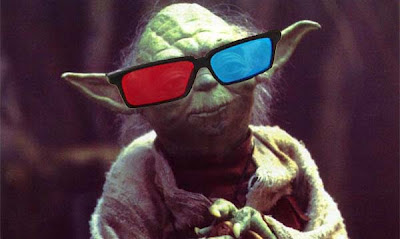 As most everyone knows, "Star Wars: Episode 1 -The Phantom Menace in 3D" is set to release in theaters this weekend. And as we get closer, I'm starting to see a lot of various commercials advertising for the new release. This isn't out of the ordinary for a big release or anything, but with all the different commercials out there, I thought I'd put together a post with all of them for your viewing pleasure. Some are cool, some are standard, but most are actually kind of lame. And it's unfortunate that they're marketing this movie so poorly; they're not playing up any of the dramatic parts at all - it either plays to kids or, in the official 3D release trailer, takes most of its footage from episodes 4-6!

So if you have any interest in the various Star Wars TV spots, you can check them out after the break. Also, here's the link to Star Wars' official site if you're interested.

We'll start with the actual TV spot (which debuted during the Super Bowl by the way) from LucasFilm for the movie itself. While it does a fine job of hitting most aspects from the entire saga, I did find it funny that of all the video footage in here, there's probably only about 5 seconds from Episode 1. They're clearly trying to remind people of the original Star Wars movies here, which is fine, it's just funny that this is a spot for this specific movie:

This next one is easily the most difficult to watch. It's a children's promo. If you can watch this entire video without cringing, then you're stronger than I:

The next two are a pair from Brisk Iced Tea. Again, pretty cheesy, but for some reason I feel like these will end up being great throwback commercials 20 years from now:
and then this one (by the way, who isn't going and downloading the BriskSaber right now?!):

And while we're on food and beverages, here's an ad for a burger chain in France that's featuring these burgers all month long (photo this time, no video). What I want to know is why no one in the states picked these up! 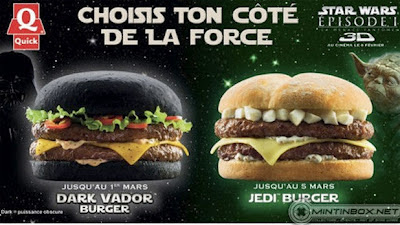 Then we move on to Verizon's ad. I found this one pretty clever actually, with the customer deciding between which of the Droids to choose. I'm positive he made the wrong choice though:

And finally, though this one doesn't officially relate to the 3D re-release, it still premiered recently, and it has a Star Wars theme. It's an ad from Volkswagon, and, as uninterested as I am in dogs in general, it was a unique idea to have the dogs all "sing" the song. Plus the dog dressed as an Ewok and the greyhound at the end dressed as an AT-AT is great!

Any others out there that I've missed? Anything you've seen that I haven't?