Movie Review: "The Woman in Black" by Ben Foutch 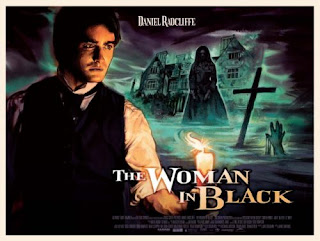 Is Daniel Radcliffe bigger than Harry Potter? The results of this weekend’s box office report will answer that question. From an acting standpoint, he wasn’t given much to work with in “The Woman in Black,” yet showed that he is more than capable of locking up the ol' magic wand.

Arthur Kipps (Radcliffe), a young lawyer weighed down by financial troubles and grieving over the death of his wife, is sent to a small, remote village with the task of handling the estate of an old woman, who recently died. Like many other protagonists in this genre, Arthur gets more than he signed up for. The side effects of being the main character in this film are: thousand yard stares with the occasional verbal abuse from local villagers, being blamed by said villagers for the mysterious deaths of their children, staying at a creepy house surrounded by a hazardous supply of water, and being haunted by a cranky, vengeful ghost.

Abundant on bleak landscapes and drenched with an overwhelming feeling of despair, this familiar ghost story never really finds a voice to call its own. For those that are new to the horror genre, this is a fantastic film to start with. For seasoned horror fans, some of the running time of this film might have been used to fantasize on the different ways your money could have been spent (I was leaning on guitar strings). With that in mind, I really don’t want to give the impression that this is a bad film. This is a classic ghost story dressed with haunting visuals and a talented cast.

For me, the scariest thing about “The Woman in Black” was the brief glimpse into superstition and group hysteria. I wish that the film had more of a back-story on the town and the mansion. Instead, most of the film involves Arthur exploring dusty old rooms filled with dusty, creepy dolls. There are also pacing problems, primarily in the middle of the film. Deviations from standard scare tactics could have helped this.

Is it wrong to call this film derivative? Is familiar filmmaking necessarily a bad thing? After all, we have our own experiences and opinions that shape our perceptions of what we call entertainment. To some this film has already been done to death. To others it might be that comforting cup of hot chocolate on a cold winter night.

The main thing “The Woman in Black” wants you to leave with is: grieving is not easy. Some people decide to come back as a ghost and make your life miserable while others might dress their pets in clothing and sit them at the dinner table. Who am I to judge?
Ben Foutch Movie Review