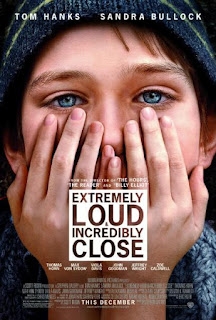 The film centers around Oskar(Horn) who's father died in the attacks on the Twin Towers on September 11th, 2001. It follows his journey to find the lock to which a key, he believes his father left him, will fit. What starts out as a simple treasure hunt for Oskar, turns into a journey where he will learn lessons about grieving, love, forgiveness, and acceptance. It is a movie with a powerful message and a subject that might still be too painful for some to deal with, but a story that is worth telling. Although the film has its flaws, overall it is a journey that I enjoyed taking.

The film centers around the Schell family, and the events before, during, and after 9/11. Oskar and his father (Hanks) have a great relationship, and their favorite activity is making elaborate scavenger hunts they call "Reconnaissance Expeditions". After Oskar's father is killed in the attacks on the World Trade Center on 9/11, Oskar is left confused, devastated, and feeling completely alone. He still has his mother (Bullock), and while they don't have a bad relationship, he has always connected better with his father. Before 9/11, Oskar and his father had been working to find the fictitious 6th Burrow in New York that his father told him about. When Oskar goes into his fathers room one year after his death, he finds a mysterious key that is connected to someone named Black. Oskar hopes this key will lead him to answers about the 6th Burrow, but more than anything it is his last way to stay connected to his father.

So Oskar sets out on a journey to talk to every one of the 400+ Blacks that are listed in New York City. Along the way he meets people who want to share there own story or to try to comfort Oskar even though he isn't seeking comfort from anyone. Here is my first problem with the movie: Oskar isn't a very likable character. He's, for lack of a better term, a pain in the ass. The movie hints at him possibly having Asperger's Disease which would explain his awkward and somewhat hostile and compulsive behavior. Since they never really absolutely say this, I still just think the kid is a pain in the ass. Oskar acted the same way even before his father died so its not that I'm being insensitive to a kid who's father died. Another reason that its hard for me to like him is that he is always carrying around a tambourine, which somehow the obnoxious sound of a tambourine is somewhat relaxing to him. Wherever Oskar moves you have to hear that awful rattling of one of the most annoying instruments on the planet. I'm not sure how, of all the tools the director could have given to Oskar to comfort him, he had to go with that one. Another problem I had with the film was the slow motion shot of Tom Hanks falling from the Trade Center, accompanied by soothing piano music, as if it is supposed to be a beautiful image. I thought that was highly inappropriate and insensitive knowing that actually happened to people. Watching the coverage that day, one of the most vivid memories were of the people falling from the towers, and I assure you there was nothing beautiful or soothing about it.

But on Oskar's journey he meets many people including the non-speaking Renter (Max von Sydow) who stays in Oskar's grandmothers apartment. Sydow's character garnered him an Oscar nod for best supporting actor - apparently the Academy really has a thing this year for silent roles. Despite The Renters lack of talking, Oskar finds comfort and the ability to confide in him. Not until he decides to take The Renter on his journey with him does he start to unlock the secrets surrounding the key and several others that he had never even knew existed. He starts to think that maybe there is more to The Renter than what he is writing for Oskar to read on his notepad. When Oskar finally finds out what the key goes to, he may not find the answers he was looking for, but he definitely finds what he needs. That scene was a pretty crucial turning point in the film for me. It went from focusing on one kid's journey, to instead showing how the events on 9/11 effected everyone around him, and how they are all trying to deal with it in there own way.

One of the most interesting aspects of this movie were six voicemails Oskar's dad left him while he was stuck in the World Trade Center. You gradually hear each one throughout the film. And while this part was obviously very sad, it still had me fascinated and on the edge of my seat waiting for the next one and what I was going to hear.

The message of this film clearly is much bigger than a kid looking for the mystery surrounding a key. It's about how loss effects people, and how each person deals with it is vastly different from one another. Ultimately, all it takes is time, understanding, and love. These are the things that Oskar learns on his journey, and in the end, even though things don't necessarily turn out the way he expected, he learns the lessons his father ultimately was trying to instill in him. Even though for me Oskar's character wasn't very likable, the overall message of this story outweighed that. So I say watch it.
Movie Review Nathan Hinds