I figured we should probably start regularly throwing up a quick post detailing the weekend box office takes on here. And with the help of Box Office Mojo, it makes for very easy work.

So after the break, I have the numbers for the top 15 movies in America this weekend.

In my opinion, the new releases all did about what I'd expect this time of year."The Grey" was the winner in an overly weak field, putting a sizable gab between itself and the number 2 film, last week's "Underworld Awakening". Another new release this weekend, "Man on a Ledge", came in at number five. A low showing, but what can be expected after the overly negative reviews it's received thus far. Otherwise, "The Descendants" went wider this week and came in at number 7 overall. "The Artist" also starts it's expand on the tails of its awards recognition. It opened to just under 900 theaters this weekend and came in at number 12 overall. 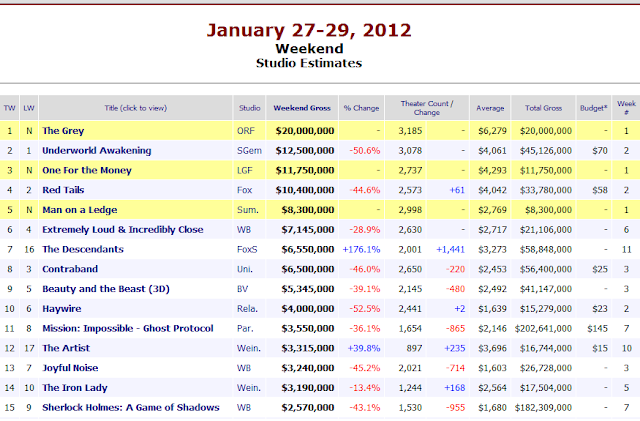