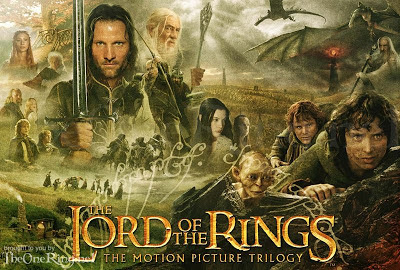 For my first ever post, I figure I'll keep the whole Top 10 thing going - I think a list like this really is a good way to get an idea about a person. Before I dive into my list though, let me give you the basics on myself. It goes without saying that I love movies (even though I just said it). I'm 23 years old, and after living in Illinois for the first 22 years of my life, I recently moved to Texas in the Dallas/Fort-Worth area and am loving it. This is the first blog I have ever been a part of, and hopefully my friends and I can be your one-stop-shop, so to speak, for all of your movie-related info.

If you notice the title says "Top 10(ish)". The reason for that being: with many of my favorite films, they come in a series and it has become impossible for me to pick just one film out of said series. For example, my all time favorite film is The Lord of the Rings. That means all three films are my favorite, not just one installment. And I justify this because they're one continuous story. I don't know of anyone who goes to watch The Lord of the Rings and says oh I'm only gonna watch 'Return of the King'. So that's why several of my favorite films will actually be multiple films. With that in mind, here are still a few pre-cursors I'd like to put on the table:

-I would like to note that this is a very difficult list for me to make, since the order can change every now and then. So really this is my Top 10(ish) list at this moment. As the previous writers have stated, don't hold me to this for the rest of my life. There's a chance things will fluctuate here are there, and a few titles might work their way off or get bumped off of this list. But this is how I see things today.

-Also, Star Wars is not included in my Top 10 because it's not actually in my Top 10. If you read Alex's list first, you might have thought it was the number-one film for all of the writers. But while I love Star Wars, for me it's not in my Top 10.

3. Harry Potter 5-8 - (I love them all but they really got great when David Yates took over as director)


So there it is, folks. I hope you enjoy my picks. Let me know what you think, whether you agree or disagree. As long as you love movies, that's what its all about!
Nathan Hinds Top 10 List