Posted by Alex Schopp
The Slackers Selection Movie Blog is a collaborative project between a handful of members from Slackers Selection Productions, originally an independent media production company out of Central Illinois. The Slackers Selection brand first showed roots when the team hosted an interactive radio show in Urbana, IL, titled Safe Harbor (it began at 10 pm, when "Safe Harbor" laws allowed programmers to do and say whatever they wanted). Primary members of the team at that time included Alex Schopp, Derek Clem, Tom Mohr, Kyle Frederick, Andy Schopp, Drew Barnes, and Ben Foutch. Along with music (often songs that were popular with the group), the show featured skits, characters, news, guests, and notably, top five movie lists. It was here that the concept of "Top 5 Movie Guides" was first introduced. 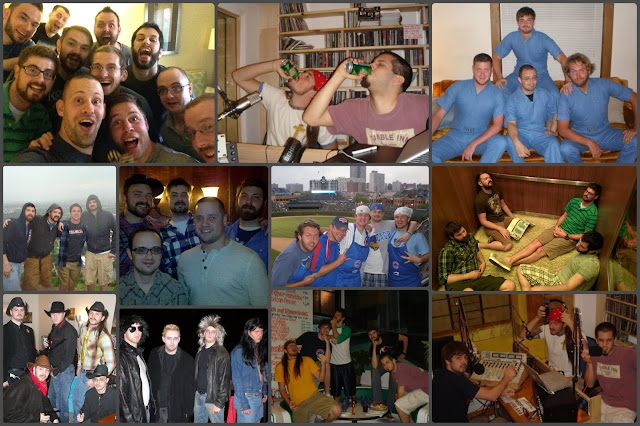 After two years in the radio industry, the group has aspirations to film skits and short films. As this was just before the YouTube boom, the primary platform for this content was television (and in this case, public access TV). As the group began filming all of the wild ideas that had come through their minds over the last few years, an idea was conceptualized to group everything together in the form of an actual show. The show was titled Off the Subject, and featured a group of friends hanging out in a room, exchanging irreverent Wouldn't It Be Funny If... ideas that were played out through skit. Oh, and the group just happened to live next to Universal's classic Movie Monsters (Dracula, Frankenstein, The Mummy, Wolf Man, the Invisible Man). The two groups would routinely play pranks on one another, accounting for the only linear narrative featured in the show. While many guest players came and went through the various episodes, the core stars of the first season were Kyle Frederick, Andy Schopp, Alex Schopp, Ben Foutch, and Ian Hastings. In the second and final season, Tyler Mitchell replaced Ian Hastings as a series regular.

After multiple episodes of content, the team disbanded, as members went their separate ways (Alex moved to Montana, Kyle became a father, Derek went back to school for his second Masters Degree, etc.). At that point, the Slackers Selection Movie Blog was founded, to help keep the group together and movie passions alive. With an initial team that included Alex Schopp, Derek Clem, Ben Foutch, Andy Schopp, and Nathan Hinds, the group focused the site around the joy of movies. The idea was that too often critics found reasons to diminish films, and this group simply wanted to promote a love for film. SSMB wanted showcase movies that could be fun and enjoyable - any movie! - and with the every-man attitude the site portrayed, the hope was that the titles recommended would resonate with casual readers and watchers. Along with the iconic Top 5 Movie Guides, the group has shared industry news, provided movie reviews, and attended various film festivals around the country. Through the prime years the site was active, other collaborators such as Elisabeth Clem, Tracy Allison, and Dan Foutch have also contributed.

During the heyday of the blog's popularity, and when the group would connect in person around holidays, skits continued to be created, ultimately providing enough content for a Slackers Selection Holiday Special. This two-hour production aired exclusively on UPTV, and featured the last digital content the group has created to date. Along with all previous members of SSP, the special also featured major contributions from Lincoln Jones and Luke Allison.

Around the holiday special, and after two years of near-daily posting on the site, the group slowly started pulling back to a point where now only the occasional end-of-the-year list will make its way to the site. With real world commitments aplenty, time just wasn't available to provide regular content any longer. The goal remains to keep the site active for posts to surface from time to time, and of course to share the backlog of content still available.

The group hopes to again one day collaborate on a film or television project.

If you'd like to reach out to the members of SSMB or Slackers Selection Productions, please feel free to email us at: SlackersSelection@gmail.com